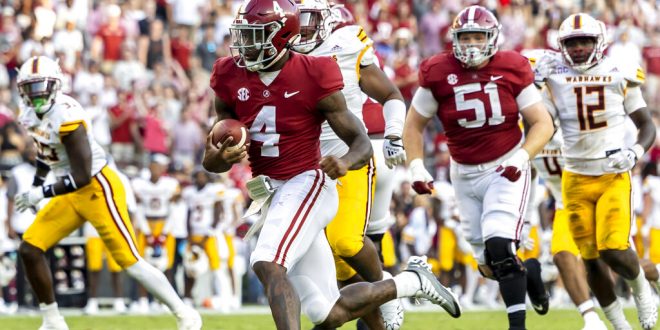 Alabama quarterback Jalen Milroe (4) runs the ball against Louisiana-Monroe during the second half of an NCAA college football game Saturday, Sept. 17, 2022, in Tuscaloosa, Ala. (AP Photo/Vasha Hunt)

Currently, there are two standout candidates when it comes to who is going to win the SEC. Those being Alabama and Georgia.

Georgia currently has outscored their opponents 130-10 in their 3 games. These are not against no names either facing number 15 ranked Oregon at the time and a revamped South Carolina team. Georgia coming off their National Championship win has left nothing to the imagination picking up where they left off with dominant performances that don’t seem to be stopping anytime soon. The Bulldogs were known for their stout defense last season but this season their offense has also been a big contributor and talking point.

Will they take home another Title? 🤔 pic.twitter.com/Ypw25QOYDh

Alabama coming off a close win against a tough Texas team the Crimson Tide continues their dynasty. While Alabama does seem to be in the shadow of Georgia currently nobody should ever count out Nick Saban and the 2021 Heisman winner Bryce Young when it comes to a chance at the SEC title and college football playoffs.

Not everyone can be Georgia or Alabama, however, this does not mean teams don’t have a chance for title contention. Coming out of the East, Kentucky and Tennessee have the best chance at contesting Georgia. While out of the West; Arkansas and Ole Miss are possible contenders.

Tennessee has a 34-27 win against a ranked Pittsburgh team to hang their hat on currently but their schedule does not leave much room for mistakes. With matchups against teams like Florida, Kentucky, Alabama and Georgia all in their future. Tennessee will need to play good football and get lucky to be able to hang on to a possible SEC championship berth.

Kentucky is in somewhat the same boat as Tennessee. They had a convincing win against a Florida team coming off a big win but need to stick to the game plan and see their quarterback Will Levis be more consistent in the pocket. However unlike the Volunteers Kentucky has an easier path o the title game with their hardest matchups coming against Ole Miss, Tennessee and Georgia.

Ole Miss has come into this year as a wild card. The Rebels have had convincing wins against lower-ranked teams however they have not had a true test this season. Their first big matchup will come next week against a Kentucky team that has momentum right now.

Arkansas is seeing the same success early that they had last year it’s time to know watch if they can continue and finish strong. Arkansas has a decent win against South Carolina but will have its first true test this weekend against Texas A&M.

For the remainder of the SEC Like LSU, Auburn, Texas A&M and Florida they will need major help to make it into the SEC title game and playoffs. These teams while not bad do not have enough firepower to blow teams out in the ways needed to make a convincing statement for voters. They will need teams ahead of them to get upset to be able to advance in the SEC standings despite possibly winning out.