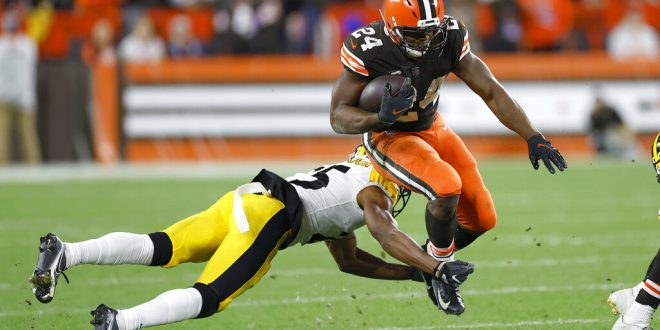 Cleveland Browns running back Nick Chubb (24) leaps out of a tackle attempt by Pittsburgh Steelers cornerback Ahkello Witherspoon (25) during the first half of an NFL football game in Cleveland, Thursday, Sept. 22, 2022. (AP Photo/Ron Schwane)

Jacoby Brissett and Nick Chubb made their presence felt as they defeated their divisional opponents for the first time since the 2020 season.

The Steelers’ banged-up defense simply could not stop Nick Chubb as he rushed for 113 yards and a TD. Nor could they stop Jacoby Brissett from picking apart the passing defense.

The Browns were able to rebound off last week’s late-game meltdown against the New York Jets when Nick Chubb opted to score his third touchdown of the game instead of going down to run the clock.

Chubb, Hunt Dominate on the Ground

Running back Nick Chubb is having a terrific start to his 2022 campaign, averaging 113 YPG and 4.9 YDS/RA. Despite the fact that he splits carries with Kareem Hunt, both players have still found ways to produce largely this season.

The Steelers’ rush defense has proven to be an issue up to this point. Last season, they ranked dead last in rushing yards allowed per game, even with TJ Watt on the field. Chubb and Hunt made sure to take advantage in this game, combining for 160 rushing yards.

While the Browns’ combination of Chubb and Hunt could not be stopped, Jacoby Brissett found ways to keep the Steelers’ defense guessing. Brissett threw for two touchdowns while completing 67.7% of his passes. David Njoku was a prime target for Brissett in this game, recording nine catches for 89 yards and a touchdown.

The Steelers have now lost back-to-back games, and their offense has averaged a mediocre 18 PPG while the Browns average 28.3 PPG.

Quarterback Mitchell Trubisky threw for 207 yards, marking the first time that he has cleared the double century mark as a Steeler. He currently ranks 19th with a 43.8 QBR this season and has completed 62.5% of his passes. However, his decision-making and inability to continue drives have left Steelers fans with a sour taste in their mouth.

Last night, the Steelers punted the ball six times, with five of them coming in the second half. As the theme has been all season, Trubisky failed to throw the ball in the middle of the field until late in the game.

The running game did not impress either last night. Running back Najee Harris ran for a season-high 56 yards, less than half of what Chubb posted as a member of a split backfield.

In spite of the struggles, Diontae Johnson and George Pickens proved to be bright spots when the ball ended up in their hands. Johnson recorded eight catches for 84 yards in last night’s loss. Pickens stole the show with an acrobatic one-handed catch in the first quarter.

Although he turned some heads on this play, he only recorded one additional catch for the rest of the game. Regardless, he received seven targets after seeing only five so far this season.

Head coach Mike Tomlin said that the team is “definitely not” considering a quarterback change despite the offensive struggles this season.

With a mini-bye before Week Four, Mike Tomlin says there will not be a QB change from Mitch Trubisky to Kenny Pickett. https://t.co/tVpNXGg2B8

The Steelers will look to bounce back when they host the New York Jets on Sunday, October 2nd. Meanwhile, the Browns will hit the road to take on the Atlanta Falcons on the same day.