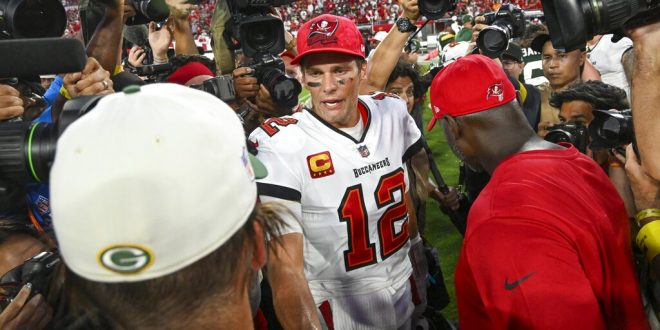 Sunday, Sept. 25 concluded Week 3 of the NFL for the Florida teams. The Dolphins (3-0) and Jaguars (2-1) were able to take home the victory while the Bucs (2-1) couldn’t seem to push past their flaws. Here’s the rundown of these nail-biting matchups.

The Fins were able to stop the Bill’s offense and beat them 21-19 with the help of their first-year head coach Mike McDaniel.

One major highlight which helped Miami reel in the win is when the Bills had one more shot to complete a game-winning drive after Thomas Morstead punted a ball into the backside of blocker Trent Sherfield, resulting in a safety. The Dolphins were able to take down Josh Allen and the Bill’s offense in the final few minutes. Melvin Ingram and Emmanuel Ogbah tackled Isaiah McKenzie on the final play, causing the Bills to attempt a spike but the clock eventually ran out.

The Fin’s defense played a big part with their stops in the second half, allowing the Bills to only score three points in the second half. Ingram was able to complete two sacks and recovered a fumble. Jevon Holland was also able to record 1.5 sacks which led to the team’s first touchdown.

On the other hand, Buffalo’s defense played well and they controlled the game till the fourth quarter. Ultimately a missed field goal by Tyler Bass gave the Fins hope and they were able to score shortly after, upping the score to 21-17.

The Dolphins are now moving on with a three-game win streak and will be clashing against the Cincinnati Bengals Thursday, Sept. 29 in an away game.

Jaguars Dominate the Chargers Out West

The Jags defeated the Los Angeles Chargers 38-10, breaking their 18-game road losing streak. The team can thank Trevor Lawrence for coming out strong and throwing for 262 yards and three touchdowns. James Robinson on the other hand scored a touchdown and rushed for 100 yards.

As for the Charger’s quarterback Justin Herbert, he decided to play through his fractured rib but it ultimately did not help the team. He finished the game with a 55 completion percentage and nine of his passes were deflected.

In summary, the Chargers were behind the entire game. Linebacker Joey Bosa had to leave the game due to a groin injury, which left Lawrence with plenty of time to throw at ease. This factor plus Herbert’s injury definitely contributed to the Jaguar’s downfall.

Next week, the Jaguars will be taking on the Eagles in Philadelphia Oct 2. Kickoff is set for 1 p.m. EST.

Bucs Come up Short in Loss to Packers

Following the Bucs 14-12 home-opener loss to the Packers on Sunday, there are multiple factors that contributed to this defeat. First, the Bucs were playing with a second-string center, a third-string left tackle, and a fourth- and fifth-string receivers. Second, Mike Evans was suspended due to his behavior in New Orleans last week. Thirdly, Chris Godwin and Julio Jones were placed on the sidelines due to leg injuries. On top of all that, we can also turn to Rob Gronkowski’s retirement as a small factor.

Brady ended up finishing with 31 of 42 passing for 271 yards and one touchdown.

You can catch the Bucs in their next match-up at home Sunday, Oct. 2 against the Chiefs at 8:20 p.m. EST. This will be the first meetup between Brady and Mahomes since the Bucs defeated the Chiefs 31-9 during the Super Bowl LV two seasons ago.

Talia Baia is a sophomore at the University of Florida studying journalism with a concentration in sports and media.
@talia_baia
Previous Newberry Panthers Suffer Devastating Shut Out at Home After 3-0 Start to the Season
Next Gators Men’s Basketball is Back