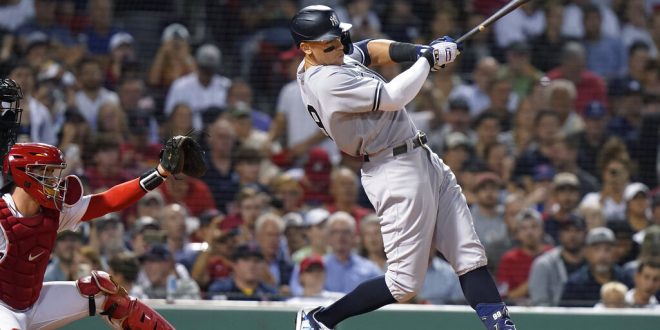 Any sports fan, regardless of if they enjoy baseball, knows that the story of the 2022 MLB season has been Aaron Judge. The Yankee star outfielder has put on a show all year. His most recent feat: hitting his 61st home run of the season against the Blue Jays on Wednesday. This ties the AL record for most home runs in a single season with the late Yankee Roger Maris, who achieved the feat in 1961.

No American League baseball player has achieved this feat in 61 years since Maris did. With seven games left, Aaron Judge will look to break the tie. Seven games to stand alone at the top of the list.

In terms of the MLB as a whole, Judge and Maris are now tied for seventh on the all-time list for homers in a season. Additionally, Judge became the fifth fastest player to hit 61 home runs in a single season. He achieved the feat in the Yankees’ 155th game of the season. Only Barry Bonds, Mark McGwire, and Sammy Sosa (who did it twice) reached this number faster.

What’s Next for Aaron Judge?

Before the season started, Judge turned down a seven-year, $213.5 million dollar extension. This would have been one of the largest contracts in league history. However, Judge believed he could earn more than that. He chose to bet on himself in free agency after signing a one-year deal worth $19 million.

The season is almost over, and the time has almost come to find out what teams around the league think Judge is worth. As a result of his outstanding performance this season, his future with the Yankees could be in jeopardy. Paying Judge can be expected to be a top priority this off-season for the Yankees.

If the money talks, Judge is likely to listen. But some would argue the money and the fame talked too loudly for the steroid era sluggers who also heard homers crack off their bats 60 or more times during a season.

The use of performance-enhancing drugs was not against MLB rules during the four-year stretch that precludes Aaron Judge from holding the major league record for home runs in a single season. From 1998-2001 six sluggers smashed 60, and two of them swatted 70.

These juggernauts revitalized interest in the game. They became the first hitters to reach the 60 homer plateau in nearly 50 years. This was after Maris made his mark 34 years after Babe Ruth boastfully shouted “let’s see some other son of a b***h match that!”

Sosa and McGwire’s 1998 season was magical. McGwire broke Maris’s record in a home game against Sosa’s Cubs. The two had gone back and forth all year. The fight wasn’t over after 62 either. The two were simultaneously competing for the major league lead for that year.

It took 21 years for another man to reach 60 home runs since Barry Bonds’s vaunted 73-home-run campaign. However, plenty would argue the achievements of Bonds and his steroid-era counterparts are tainted.

The BWAA has agreed, to keep Bonds, Sosa, and McGwire out of the Hall of Fame during their years of eligibility. However, the writers can’t keep the men who supplanted the Sultan out of the record books, though. As incredible as Judge’s season was and is, he is unlikely to reach Sosa’s 66, McGwire’s 70, or Bonds’ 73 home run personal bests.

The Yankees have seven games remaining for Judge to try to inch past the trio.