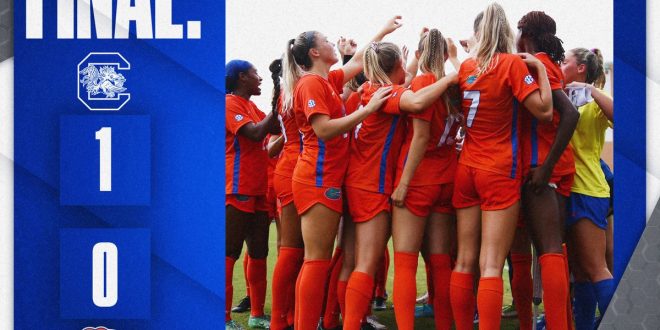 Gators lost 1-0 to the Gamecocks. (Photo from Gators Soccer Twitter)

Going into the first half, Florida stayed back and observed the Gamecocks’ movements. The Gamecocks were attacking early on and made it hard for the Gators to cause a turnover. At 5:08, the referees called a foul on South Carolina’s Shae O’Rourke which gave Florida the opportunity they needed to turn their slow start around.

Florida’s defense made it difficult for the Gamecocks to navigate around them and take shots.

It took 20 minutes into the game for the first shot to be taken. Julianne Leskauskas worked her way around some Gamecocks giving her the chance to shoot, but the ball went over the crossbar.

At 33:25, Corrina Zullo pulled off the first shot for the Gamecocks and Alexa Goldberg was there to save it. Two minutes later Catherine Barry made a fast break towards the net, moved the ball to her right foot and shot. Goldberg dove on top of the ball to stop the shot.

For the last five minutes of the half, both teams ran up and down the field fighting for a chance to put a score on the board. However, neither were unable to come out with a goal.

Gamecocks stepped up their game

The Gamecocks came out of halftime ready to score. In the first two minutes of the period, Barry took the first shot.

Right after, Leskauskas sent the ball off her foot to Maddy Pirrello. She faked the shot to get the defender out of her way and ripped it towards the net, but it went out for a South Carolina goal kick. Any time there was a goal kick or throw-in, Florida was always there to get the first touch on the ball.

After the goal, South Carolina started to lose gas and Florida kept the ball on the scoring side of the field. With four minutes left of the game, Florida needed to capitalize on back-to-back corner kicks but it could not put the ball in the net and the Gamecocks escaped with a 1-0 win.

What’s next for the Gators