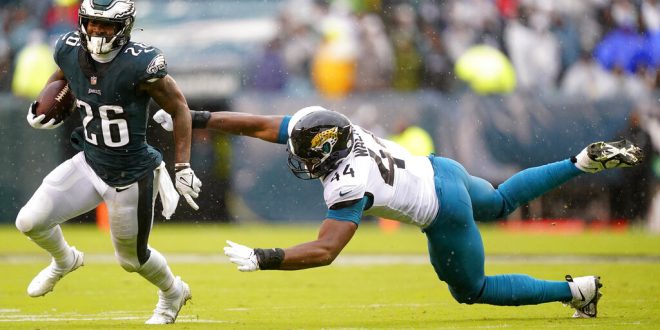 Philadelphia Eagles' Miles Sanders runs with the ball past Jacksonville Jaguars' Travon Walker during the first half of an NFL football game Sunday, Oct. 2, 2022, in Philadelphia. (AP Photo/Matt Rourke)

With four weeks down in the NFL season, there have certainly been some major surprises. Even with teams plagued by injuries, that has not stopped several players from stepping up and leading their teams to a great start.

The NFC East has certainly been one of the biggest surprises this season, with three teams posting winning records. The Philadelphia Eagles lead the division with a record of 4-0 and are the only unbeaten team left in the NFL.

The Dallas Cowboys and New York Giants are 3-1, with the Cowboys leading the season series following their win in Week 3. Even without Dak Prescott, Cooper Rush has filled in tremendously. He has yet to lose as a starting quarterback in the NFL. The Washington Commanders have dropped their last three games after winning their opener against the Jacksonville Jaguars.

The AFC East is also off to a surprising start, with the Miami Dolphins and Buffalo Bills tied for first place at 3-1. While the Bills were considered Super Bowl contenders, they fell to the Dolphins in Week 3. Buffalo nearly fell in Week 4 before erasing a double-digit deficit in the second half on Sunday against the Baltimore Ravens.

The New York Jets are 2-2 with comeback victories over the Cleveland Browns and Pittsburgh Steelers. The New England Patriots, though, are 1-3 and on their third quarterback this season after injuries to Mac Jones and Brian Hoyer.

The Kansas City Chiefs, Minnesota Vikings and Green Bay Packers are all 3-1 this year. The Tampa Bay Buccaneers and Atlanta Falcons are tied for first place with a record of 2-2.

The Jaguars and Tennessee Titans are both 3-2 in the AFC South, with Los Angeles Rams leading the NFC West. They will conclude Week 4 of the NFL Monday night with a matchup against the San Francisco 49ers.

Justin Herbert currently leads the league in passing yards. He has also thrown for nine touchdowns and has only been intercepted twice despite appearing on the injury report this year.

Patrick Mahomes is tied for the league lead with 11 touchdown passes. Lamar Jackson has also thrown 11 and has rushed for two more, while Jared Goff also has tossed 11. Tua Tagovailoa was off to a red-hot start before his injury and will miss this week’s game against the Jets.

Saquan Barkley currently leads the league with 463 rushing yards. Nick Chubb is the lone other running back to surpass 400 yards, while Tyreek Hill, Stefon Diggs and A.J. Brown are the top three leading receivers this year. Defensively, Jordan Poyer of the Buffalo Bills has four interceptions to lead the league. Minkah Fitzpatrick, Eddie Jackson and Marcus Williams all have three.