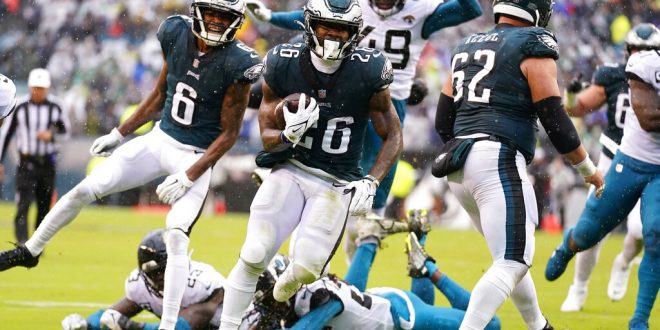 Philadelphia Eagles' Miles Sanders, center, runs in for a touchdown during the first half of an NFL football game against the Jacksonville Jaguars on Sunday, Oct. 2, 2022, in Philadelphia. (AP Photo/Matt Rourke)

The Philadelphia Eagles remain unbeaten as they overcame adversity, rallied against the Jacksonville Jaguars and came out on top in a 29-21 victory. The Eagles improve to 4-0 on the season, while Jacksonville’s record evens out at 2-2.

The Eagles were able to bounce back from a 14-0 deficit, their first double-digit deficit of the season. Philadelphia took over, putting up 29 unanswered points against the Jaguars.

Eagles quarterback Jalen Hurts got things going for Philadelphia with a 3-yard touchdown run on fourth-and-goal bringing the score to 14-7.

The Eagles kept up the energy by forcing a three-and-out. Following, Philadelphia running back Miles Sanders scored on a 10-yard touchdown run, tying the game 14-14. Then, Jacksonville quarterback Trevor Lawrence fumbled the ball as Philadelphia linebacker Haason Reddick made the recovery. Eagles Philadelphia running back Kenneth Gainwell followed by putting up another 10-yard touchdown to extend the Eagles’ halftime advantage to 20-14.

Early in the fourth, Eagles kicker Jake Elliott completed a 43-yard field goal, bringing Philadelphia’s lead to 23-14. Sanders ran in his second touchdown of the night to score the final points for the Eagles. The 5-yard touchdown run brought the score to 29-14.

While the Eagles brought home the victory, Jacksonville got off to a great start with an early lead. Jaguars safety Andre Cisco made a 59-yard interception return, bringing Jacksonville out in front 7-0 in the first quarter. The first quarter was capped off by a 4-yard touchdown pass from Lawrence to Jacksonville wide receiver Jamal Agnew. The TD extended Jacksonville’s lead to 14-0.

Agnew finished with two receiving touchdowns on the day, when he scored on an 8-yard TD pass in the fourth.

Despite the early lead, the Jaguars failed to bring home the win. Jacksonville had five takeaways with four fumbles. Every Jags fumble resulted in an Eagles TD. On the final fumble of the game, Jacksonville had a chance to tie the game with just 1:48 remaining when Reddick sealed the win for Philadelphia by forcing a strip-sack fumble on Lawrence.

The @Eagles offense has been rolling on their way to a 4-0 start. #FlyEaglesFly pic.twitter.com/bdKNwELMCb

Eagles and Jaguars Looking Ahead

The Jaguars will next host the Houston Texans. The game will be an AFC South battle as the Jaguars look to take the No. 1 spot in the division and improve to a 2-0 division record. Jacksonville is currently tied with the Tennessee Titans for the lead in the AFC South with an overall 2-2 record. The Texans remain the only team in the NFL who has yet to record a win.

Meanwhile, Philadelphia will next travel to take on the Arizona Cardinals. The Cardinals improved to 2-2 on the season after defeating the Carolina Panthers 26-16 on a night where Arizona quarterback Kyler Murray threw for 207 yards and two scores. Despite getting back on track with a week four win, Arizona will be a clear underdog as they enter their matchup with the undefeated Eagles.

Ellie is a third-year sports and media journalism major at the University of Florida.
@ellie_shreve
Previous NL Playoff Landscape
Next Top Four Teams in the American League