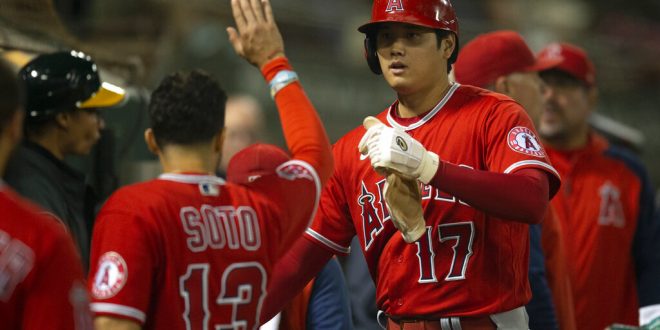 Los Angeles Angels designated hitter Shohei Ohtani (17) is greeted by his teammates after he scored on a double by Taylor Ward during the fifth inning of a baseball game against the Oakland Athletics, Monday, Oct. 3, 2022, in Oakland, Calif. (AP Photo/D. Ross Cameron)

The Los Angeles Angels and Shohei Ohtani have come to a record setting arbitration agreement.

Ohtani is baseball’s unicorn. He is a true two-way player, performing at all-star levels as both a hitter and pitcher. He is the reigning AL MVP and has put up another monster season in 2022. Slashing a .276 batting average with 34 home runs and 94 RBI. Further continuing his dominance on the mound with a 2.35 ERA and 213 strikeouts.

For the Angels, Ohtani serves as the ace of their pitching staff, while also being a middle of the order bat who hits 30-plus homers a year.

He is the most versatile player in the game and has one year left of team control before he can test free agency.

In MLB, players with three to six years in the majors are eligible for arbitration. This is where players can negotiate their pay with their team for next season. If they don’t come to an agreement they will be sent to an arbitration hearing. Where a third party hears both sides and decides what the player’s salary will be.

Shohei Ohtani and the Los Angeles Angels are in agreement on a one-year, $30 million contract to avoid arbitration. It’s the largest salary ever for an arbitration-eligible player and will be his final number before he hits the free agent jackpot following the 2023 season.

There is no surprise that the Angels had to cut a large check to match Ohtani’s play on the field. The two sides avoided an arbitration hearing by agreeing on a one-year $30 million contract. This is the largest contract ever given to a player in his arbitration years.

Ohtani will be the prize of the 2024 free agency class. He will be in the prime of his career at 29 years old when he hits the open market.

He is a perennial MVP candidate and provides value no other MLB player can. It is hard to speculate what the exact number his deal will be. It is not crazy to say it could be the largest annual contract ever given in the sport.