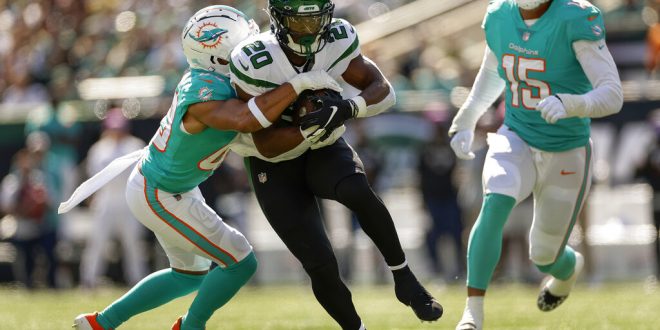 It’s been rough waters in Miami as a second week without Tua Tagovailoa meant a second blemish on the Dolphins’ record following a 40-17 loss against the Jets.

A big play on defense fueled the Jets early as the New York offense ran rampant all the way to the win.

The first play for a starter in Teddy Bridgewater was meant to be a dream for the Miami native. What ensued for the Dolphins marked the beginning of a nightmare, one the team has come to know all too well. Snap, fake handoff and the next thing Bridgewater saw was a rushing Sauce Gardner.

A futile attempt to avoid the sack in the endzone marked the beginning of the end. The ball wobbled long of the line of scrimmage as Bridgewater’s helmet crashed against the Jet green turf.

As Bridgewater struggled up, the reality of an intentional grounding call meant a safety against the Dolphins. Bridgewater left the game with the shame of a safety as he entered the league’s concussion safety protocol.

As the Dolphins grew tired of mentions of “safety,” their run defense would not provide as much.

Back-to-back punts and a New York field goal totaled the offense through the first quarter. The Jets would hit the ground in the second as Michael Carter got his first of a pair of one-yard touchdowns in the game.

Down 12-0 with the backup quarterback hurt meant Skylar Thompson– time for Miami. He had three passes for 17 yards, a 27-yard pass interference call and was backed by Raheem Mostert.

Gardner would punish the backup to the backup as he picked off Thompson in the next Dolphin drive.

In the absence of Tagovailoa, the Jets would have Zach Wilson and an inspired Jets run performance.

Wilson capitalized on Gardner’s effort as he led the team downfield before scrambling for six.

Miami answered with an unlikely rushing touchdown from tight end Durham Smythe, looking for answers away from the Thompson.

The Dolphins would head into the half down 19-14, adding their final three points on a field goal to start the second.

A fumble added to Thompson’s struggles as the Dolphins began to fold under the pressures of their depth chart.

The Jets continued to capitalize behind Wilson, the table setter and Breece Hall, the guest of honor at the run game buffet.

New York would award itself three scores on the ground. Three different recipients in Michael Carter, Hall and Braxton Berrios got their share of the Dolphins’ run defenses.

Berrios’ touchdown would feed into the concussion worries plaguing the NFL.

A massive flaw still in the #NFL protocol is that if you don't stand up, you can't show ataxia or gross motor instability.

Watch how long Braxton Berrios stays down on a knee after this huge hit. He couldn't celebrate his own touchdown. Brain injury or wind? We'll never know. pic.twitter.com/CP6L9V7vXh

The clock ran with the Jets before settling on a 23-point win for New York.

Ultimately, the Dolphins lacked the necessary quality under center. Tagavailoa’s absence has been noted and felt by a Miami that’s dropped two straight without its star quarterback.

On the sidelines, Bridgewater provides an interesting case into the NFL’s concussion protocols after a spotter went against the Dolphins’ initial ruling of an elbow injury. The Dolphins have now lost their starter and backup quarterback to concussions in AFC East play. Bridgewater remains listed as a questionable addition to the roster set on a return to back home against the Minnesota Vikings.

Junior studying Journalism - Sports & Media at the University of Florida
@@delossantosr
Previous Mariners and Astros to Compete for a Spot in ALCS
Next Gators v. LSU Preview 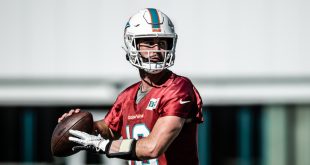