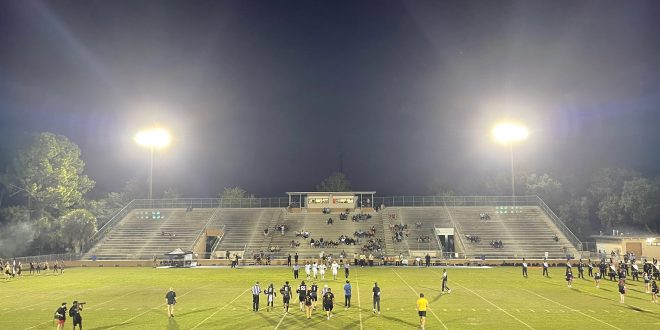 The Oakleaf Knights put up a tough fight, but came up short against the undefeated Buchholz Bobcats, with a final score of 45-31. Throughout the game, there was a lot of back and forth between the teams. The Knights were not going down without a fight and continued to challenge the Bobcats. However, when Oakleaf challenged Buchholz, Buchholz came back even harder. The Bobcats continue to establish their dominance against their opponents and serve as the biggest threat in the league.

Both Teams Remain Focused and Locked In

Bobcats quarterback Creed Whittemore knows what it takes to lead his team to victory. Tonight, he got the Bobcats on the board after launching a beautiful pass to Jaren Hamilton to take a 7-0 lead with 7:22 remaining in the quarter. The Knights were looking to get on the scoreboard in response to the Bobcats’ touchdown, and they did just that. Oakleaf High’s running back Devin Outlaw had a 52-yard rushing touchdown into the end zone to put them on the board and tie up the game with 4:17 to go in the first. Both teams encompassed intensity and had their eyes on the win.

The Bobcats quickly capitalized when Creed Whittemore threw a short pass to running back Quinton Cutler, who rushed 54 yards into the end zone to give them a 14-7 lead. As the clock continued to wind down, Oakleaf was determined to bounce back and not let Buchholz stretch their lead. Knights Quarterback Drew Ammon connected with his teammates to advance down the field. He made a pass to wide receiver Taylor Bradshaw who had a 25-yard run into the end zone for their second touchdown of the night to close out the first quarter. The game was tied again at 14-14.

Buchholz began with the ball in the second quarter, but the Knights defense displayed strength and toughness, forcing a fourth down. After giving up possession, the Bobcats were not about to let the Knights take the lead. Both teams continued to make big stops and made it difficult for the offensive lines to convert, which became a theme throughout the second. The quarter progressed as each team struggled to find a way to get to the end zone.

Later on in the second, Oakleaf put in their second-string quarterback Brandon Wallace Jr, who led them to a fourth down, but helped put them in field goal range. The 37-yard field goal was good by Drew Ammon. Ammon serves as a dual threat, playing both quarterback and kicker. Oakleaf took their first lead of the night. It was 17-14 with 5:25 to go until half. As halftime was approaching, Buchholz was able to gain yardage and also put themselves in field goal range. Bobcats kicker Reed Rousseau tied the game with a 37-yard field goal with less than a minute to go. It was 17-17 at the half. The back and forth made the game exciting. The Knights revealed their ability to impose challenges on the Buchholz offense, which is hard to be stopped.

Buchholz kicker Reed Rousseau makes a 37-yard field goal to tie the game with less than a minute to go in the second quarter. pic.twitter.com/OBwtOAZq8v

Buchholz stayed hungry, with a goal to remain undefeated, while Oakleaf was determined to serve the Bobcats their first loss. Whittemore played smart to push the ball forward and regain the lead. He threw a gorgeous pass from the 43-yard line to wide receiver Jacarree Kelly into the end zone with 6:07 to go in the third and gave Buchholz a 24-17 lead. As the game has shown, when one team scores or makes a stop, the other team comes back and does just the same. Oakleaf running back Devin Outlaw came up big as he continued to be a driving force. He pushed the Knights down the field, ultimately leading to a rushing touchdown to bring the score to 24-24 with 2:51 remaining in the third.

Outlaw had a lot of important plays that revealed his skill as a player. The third was close to coming to an end when Whittemore threw a pass to Cutler who rushed 20 yards into the end zone to take back a 31-24 lead, which they never lost again. This was Whittemore’s fourth touchdown pass of the night, emphasizing how impactful of a leader he is on their team.

Whittemore makes short pass to RB Quinton Cutler who has a 20-yard rush into the end zone for another Bobcat touchdown. The Bobcats lead 31-24 with 1:22 left in the third. pic.twitter.com/0Tf6GPNPOq

Oakleaf continued to persevere and show their capability as a team. Shortly after Buchholz took back the lead, Ammon threw another touchdown pass to Isaiah Shevchook to tie it up 31-31 with 11:54 in the fourth. This was the last time the game would be tied.

Although Oakleaf showed out and revealed their strengths, Buchholz took over the remainder of the fourth quarter.  Whittemore launched the ball from the 40-yard line to Jaren Hamilton for his fifth touchdown pass of the night. There was 8:56 to go in the game and the Bobcats were a leg up with a score of 38-31. Oakleaf was unable to convert in response and remained scoreless for the rest of the game. As it approached the final minutes, Whittemore carried the offense as he connected with his teammates to move closer to the end zone. The Bobcats progressed all the way to the 1-yard line where Whittemore drove it home with 0:47 seconds left to close out the game with a 45-31 win.

Whittemore carries the ball from the 1-yard line into the end zone to stretch the Bobcats lead with 0:47 seconds left in the game. Buchholz leads 45-31. pic.twitter.com/ZeMNP4dPtY

There is definitely credit to be given to how Oakleaf played Friday night. Ultimately, Buchholz rose to the top, to bring their record to 6-0 on the season. Buchholz plays their next game against Bartram Trail on Oct. 21.

Rachel Rosen is a sophomore at the University of Florida studying journalism with a specialization in sports and media.
Previous SEC Dominates New College FB Top 25
Next Matt Ryan leads inspired Colts win over Jaguars