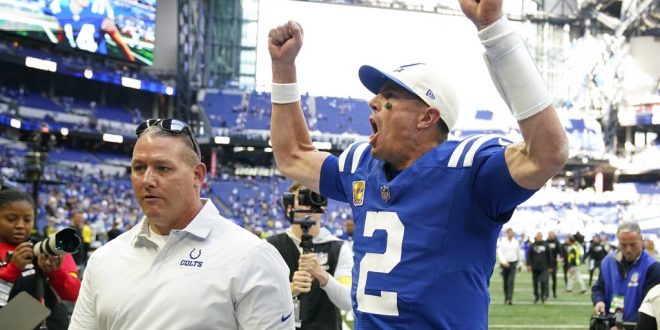 After a 24-0 win in week two, Sunday’s matchup between the Jaguars and Matt Ryan and the Indianapolis Colts meant a chance to complete the divisional sweep for Jacksonville.

A chance to remedy the slump symptomatic of two losses on the trot.

The chance to dream of their first divisional crown since 2017.

These were the chances Jags fans dreamt of when the team drafted Trevor Lawrence.

These were the chances whose vibrancy faded in the waning moments of a 34-27 loss to the Colts on Sunday.

A Trevor Lawrence-Matt Ryan showdown wouldn’t make the cut of premiere quarterback matchups in the NFL, but Sunday seemed an exception.

The two combined for 554 yards in the air good for four touchdowns, zero interceptions, and two rushing touchdowns courtesy of Lawrence.

In the end zone and on the board.#JAXvsIND on CBS pic.twitter.com/P6ETTHmWZZ

Lawrence drew first blood on the night with a QB sneak good for six on the Jags’ second drive.

JaMycal Hasty would boost Lawrence’s efforts with a 61-yard rush up the gut of a Colts’ defense that could only stop and stare as the Jags went up 14-3.

With the half dwindling, a 15-year veteran in Matt Ryan would answer with a touchdown drive of his own.

Eight passes for 54 yards in four minutes and twenty-eight seconds as Ryan did what Lawrence had failed to do through two quarters.

The Jaguars would respond on their first drive of the half behind the same Trevor Lawrence whose only scoreboard contribution had come on the ground.

In a repeat of their first scoring drive, the Jags found their support behind a 27-yard Travis Etienne Jr. rush before Lawrence ran in for his second rushing touchdown of the night.

75 yards in 7 plays to open up the second half! @Trevorlawrencee waltzes in.#JAXvsIND on CBS pic.twitter.com/GgRuooEDnw

The Colts would reply with a 75-yard drive behind an inspired Matt Ryan arm. Where the Jags needed Lawrence, the Colts found Deon Jackson for a three-yard touchdown rush. A failed two-point attempt would leave the Colts within two, 21-19 Jags.

Following downs from the Jags, Matt Ryan completed seven attempts in stride to set up the potential Indy lead.

Jelani Woods would put an exclamation point on the drive as the Colts took the lead for the first time with yet another Ryan touchdown pass.

On the ropes, Lawrence faced a game-deciding drive as the Jags lost 26-21.

84 yards on 18 plays later and Lawrence seemed worthy of his first-round first-pick tag. Lawrence found his first passing touchdown of the game, a four-yarder to Christian Kirk.

With two minutes and 38 seconds to go, it came down to Matt Ryan.

The Indianapolis 34-yard line seemed an unforgiving distance away from the 66 yards Ryan needed to flip the 27-26 scoreline.

Another to Phillip Lindsay, five yards.

Dropback and a 23-yard loop found Alec Pierce as Ryan completed his sixth and final pass of the drive, a winner’s pass.

The Colts ended the game on a 34-27 win behind the signal caller many had criticized after a slow start to the season. A team record-setting single-game completions night with 42 of 58 passes completed added up for three touchdowns, zero turnovers, zero sacks, and the win. For the Jags, Ryan’s heroics represents the third successive loss for Jacksonville.

Of the team’s four losses this season, all four have been within eight points of the opponent. Jacksonville will look to shake off the loss with eyes on the red-hot New York Giants offering no relief for the Jags.