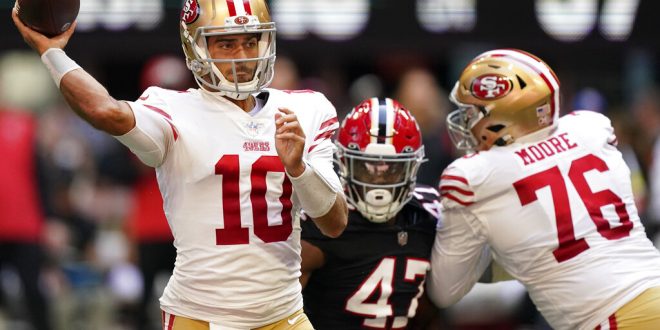 San Francisco 49ers quarterback Jimmy Garoppolo (10) works in the pocket against the Atlanta Falcons during the first half of an NFL football game, Sunday, Oct. 16, 2022, in Atlanta. (AP Photo/Brynn Anderson)

After an exciting week six across the NFL, week seven kicked off Thursday night with the Arizona Cardinals defeating the New Orleans Saints 42-34. Week seven continues on Sunday with a variety of key matchups to lookout for for.

The Atlanta Falcons travel to Cincinnati to face the Bengals. Atlanta has been a surprise team this season and they’re coming off an impressive win against the San Francisco 49ers. The Falcons are playing well on both sides of the ball, and its young core is growing into their respective roles.

Defensively, the Falcons have done a solid job pressuring the pocket. The team has recorded eight sacks with 60 sack yards. In the air, the team also has six interceptions.

Offensively last week, Falcons quarterback Marcus Mariota completed 13 of 14 passes. However, he was sacked twice and this has been a recurring theme for Atlanta. Additionally, the offensive line has allowed Mariota to be sacked 14 times in the last five games. Regardless, the offense has exceeded expectations with rookie wide receiver Drake London, receiver Olamide Zaccheaus and tight end Kyle Pitts leading the receiving core.

The Bengals come into this matchup off of a comeback win against the Saints. Joe Burrow had 300 yards in the air with three touchdowns and completed 28 of 37 passes. Wide receiver Ja’Marr Chase had another fantastic game with 132 yards and two touchdowns on seven receptions.

Cincinnati has had success with their defensive line, recording nine sacks on the year. This should help them take advantage of the Falcons’ offensive line weaknesses. The Bengals will have to focus on shutting down London and forcing the Falcons to progress up the field without him.

The Kansas City Chiefs will travel to San Francisco to play the 49ers. Patrick Mahomes and the Chiefs come off of a tough 24-20 loss to the Buffalo Bills. Moreover, Kansas City has struggled to protect Mahomes over the last three games. Even though Mahomes put up an outstanding performance throwing for 338 yards and two touchdowns, two interceptions played costly in their loss to the Bills.

Travis Kelce has been the unsung hero of the receiving core for the Chiefs eclipsing all the receivers with 455 yards and seven touchdowns. Kelce, JuJu Smith-Schuster and Marquez Valdes-Scantling have been primary targets for Mahomes.

San Francisco is coming off of a loss against the Falcons in which Jimmy Garoppolo had a season-high 296 passing yards. Garoppolo had two touchdowns and two interceptions against Atlanta and completed 29 of 41 passes.

The Seattle Seahawks are coming off a win against the Arizona Cardinals 19-9, and quarterback Geno Smith continued his fantastic play. Smith has done a tremendous job limiting the turnovers, throwing just two on the season. However, Seattle is another team that has quarterback protection problems, allowing 12 sacks in five games.

The Seahawks’ premier offensive players, DK Metcalf and Tyler Lockett, have a combined 829 yards and four touchdowns this season. In the rushing game, Kenneth Walker III has stepped up and has rushed for 243 yards with two touchdowns. With Rashad Penny out for the season, it’s Walker III’s backfield now.

Receiver Mike Williams has hauled in 30 catches for 409 yards and the absence of receiver Keenan Allen should keep is targets at a high number.

Running back Austin Ekeler has also been a significant source of yards this season although he was contained to 36 yards on 14 attempts with one touchdown, last week. Moreover, the Chargers’ strength of schedule hasn’t been the strongest this season. Though, they’ve taken advantage with their winning streak.