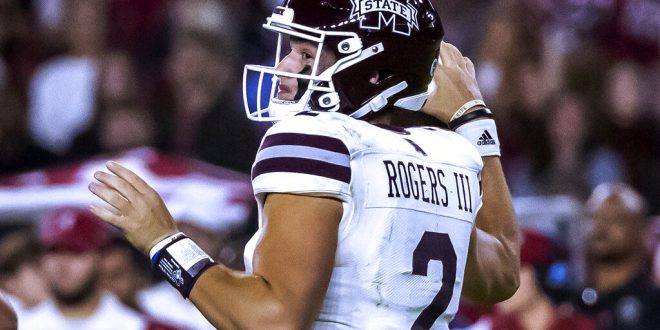 Mississippi State quarterback Will Rogers (2) drops back to pass during the first half of the team's NCAA college football game against Alabama, Saturday, Oct. 22, 2022, in Tuscaloosa, Ala. (AP Photo/Vasha Hunt)

The Mississippi State Bulldogs took home a 30-6 loss after going against Alabama Saturday. This week, the team has a bye week.

During the SEC teleconference, Mississippi State’s head coach Mike Leach said that his team “was still a work in progress.”

Leach was asked to elaborate on their past game against Alabama after the game and declined. When asked again during the teleconference, he stated that it was “still pretty expensive.”

When asked about Alabama quarterback Bryce Young, Leach did not have much input. He stated that “there are a lot of good ones [quarterbacks]” that he has seen. “I’ve seen better ones too, but um- but you know obviously most guys are worse.”

Leach will use this week to prepare his team for the upcoming game against Auburn and to “keep working on competing.” Not only that, but this week will also allow for the team to gain some much needed rest.

Throughout this season, Mississippi State has not been the luckiest when it comes to winning games, despite having Will Rogers as a quarterback.

Rogers is currently ranked No. 1 for passing yards in the SEC with a total of 2,555. He holds the record over Tennessee’s Hendon Hooker by 462 yards.

Mississippi State also has two linebackers, Jett Johnson and Nathaniel Watson, who hold the No. 2 and 3 spots in the SEC for tackles. Johnson sits at No. 2 with 72 and Watson sits at No. 3 with 68.

Mississippi State is currently sitting at No. 8 in the SEC with a 5-3 overall record. In conference play, the team sits at 2-3.

The team will take on Auburn Nov. 5 in Starkville, Mississippi.