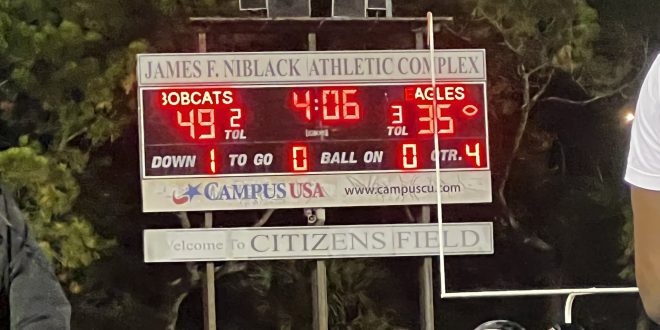 Buchholz keeps the Golden Eagles away on senior night Thursday

By Brandon Hernandez and Ryan Hirsh

Buchholz honored 19 seniors in their last home game of the season ahead of their game against the Fleming Island Golden Eagles Thursday night. That would also come with an earned win for the last home game played at Citizens Field.

The Buchholz Bobcats (7-1) defeated the Fleming Island Eagles (4-4) 49-35 Thursday for the Bobcats last home game of the season.

Starting from their own 34-yard line, the Bobcats made an impact quickly, scoring the first points of the game within 56 seconds on the field with a connection by senior quarterback Creed Whittemore throwing a 40-yard touchdown to senior wide receiver Jaren Hamilton.

Up 7-0, the Buchholz defense made its way onto the field with the challenge to keep the Golden Eagles offense in control. That would be tested by the four-star senior running back Sam Singleton, who is committed to play for the Florida State Seminoles next year.

The run would be an issue against Singleton and the Golden Eagles offense. Including the threat of dual-threat sophomore quarterback Cibastian Broughton, avoiding defenders with his legs as he ran out of the pocket for first downs in the opening drive for the Eagles.

Thirteen plays later, Fleming Island found themselves in their first fourth down situation of the game on the Bobcats side of the field. Throwing it to Singleton for a screen pass on the right side of the field, he ran close to the first down marker only to be stopped a yard short from the line by numerous Bobcats at the Buchholz 15. Resulting in a turnover on downs.

The Golden Eagles had no answer for the Bobcats offense at the start of the game. Buchholz only needed a few plays to work their way once again from their own 15-yard line to the opponent’s endzone. A combination of runs and passes set the Bobcats up at the five-yard line, which led to a five-yard touchdown pass by Whittemore to senior receiver Jacarree Kelly with 2:29 left in the first quarter to extend the Bobcats lead, 14-0.

Buchholz extends their lead to 14-0 with a 5-yard touchdown pass from quarterback Creed Whittemore to Jacarree Kelly. pic.twitter.com/cV25vQvMnX

Going into the second quarter, the Eagles went on another long drive that bled more than five minutes with multiple runs down the Bobcats defensive line. The drive reached another fourth down situation as a sack on Broughton by defensive end Thomas Weinhardt on a first and 10 led to the Eagles mismanaging the opportunity to score with three plays following the sack only producing five yards. Another turnover on downs on Buchholz’s side.

Trying to keep averaging a score on every drive became a challenge in the second quarter with penalties bringing the Bobcats back in crucial parts of offensive drives in the quarter. Even one throw by Whittemore that would’ve been a 30-yard touchdown deep in a late first-half drive was called back due to a holding penalty against Buchholz.

Fleming Island would make the Bobcats pay as they produced a 27-yard rushing touchdown, faking a handoff to Singleton to run dash into the endzone untouched. The drive lasted two minutes.

The Bobcats constructed an answer to the Eagles touchdown with one of their own with two back-to-back 20+ yard runs down the middle of the field. Including junior running back Jordan Richardson breaking out of the trenches into the open field for a 21-yard rushing touchdown.

In the remaining 2:38 minutes before the end of the first half, Singleton powered through defenders to run the Eagles into scoring range as he broke out for a 40-yard run near the 38-yard line on the Bobcats side. Five plays later as the clock continued to count down, the Eagles sat two yards from the endzone line and a handoff to Singleton closed the gap back to a one-touchdown deficit going into halftime with Buchholz leading 21-14.

“We knew that this team would be pretty dangerous,” Bobcats head coach Mark Whittemore said. “We knew if we gave them an inch, they’d take a mile.”

Everything seemed to be going in the Eagles favor when they got the ball to start the second half. However, Buchholz’s defense came out with new life and shut down Fleming Island’s drive after a six-play drive ended on a failed fourth down at the Buchholz 20-yard line.

The Bobcats offense also found new life after halftime and looked determined to put the Eagles away. Whittemore connected with Kelly on a 25-yard pass early in Buchholz first drive of the second half and then hit Hamilton in stride on a 41-yard touchdown pass to put the Bobcats ahead 28-14 in the third quarter.

Creed Whittemore launches the ball 41-yards down the field for another Jaren Hamilton touchdown, extending the Bobcats lead to 28-14. pic.twitter.com/PkHqDLYTWl

The Golden Eagles had a quick three and out, which led to the first punt of the game by either team. The Bobcats offense continued to pick up steam as they drove down the field with ease. Whittemore was able to complete a big pass to James Williams and a 35-yard touchdown pass to Kelly two plays later.

A failed onside kick attempt by Buchholz gave Fleming Island great field position on their next drive. The Eagles took advantage immediately. Broughton found receiver Dakota Rowe in the air and Rowe broke multiple tackles to take the ball down to the 17-yard line. The Bobcats got a holding penalty on the next play but then forced Fleming Island into a fourth and two from the goal line. Singleton powered through to make the score 35-21 before the third quarter ended.

Going into the fourth quarter with the ball, the Bobcats struggled to move past the line of scrimmage as the pass rush forced the Buchholz punting crew to make a rare appearance in the game.

The momentum grew for the Bobcats after the big play on special teams. After a delay of game penalty against Buchholz, Whittemore extended the lead to 42-21 himself by taking the ball for a 31-yard rushing touchdown.

However, the Eagles were still alive in the game thanks to Broughton’s ability to climb into the pocket and extend plays on crucial downs. To finish a nine-play drive midway through the fourth quarter, the Fleming Island quarterback scrambled into a frenzy to avoid pass rushers to run into the endzone for a 14-yard touchdown.

Fleming Island #11 Cibastian Broughton takes it 14 yards to the house for an Eagles touchdown. Bobcats lead 42-29 with 7 minutes left in the fourth quarter. pic.twitter.com/lbkxKH1LEF

Following the touchdown came a bad snap to Broughton, who was the holder for the point after try. Rushing to recover the ball that bounced near the 20-yard line for the Eagles, Broughton grabbed it and threw it to a wide-open Robinson in the corner of the endzone. The Bobcats still led 42-29 with around seven minutes remaining.

With the late push by the Eagles, Buchholz continued to tally points with a 20-yard touchdown pass to Hamilton as he carried two defenders with him into the endzone.

Despite an 80-yard touchdown pass that was caught wide open midfield by Singleton and followed by an unsuccessful two-point try, there would be no great comeback in this game by the Eagles. The clock hit zero as the Bobcats took the game 49-35 to finish at home undefeated for the season in Citizens Field.

Buchholz will travel to face the Bolles Bulldogs in Jacksonville, Florida, Friday at 7:30 p.m.