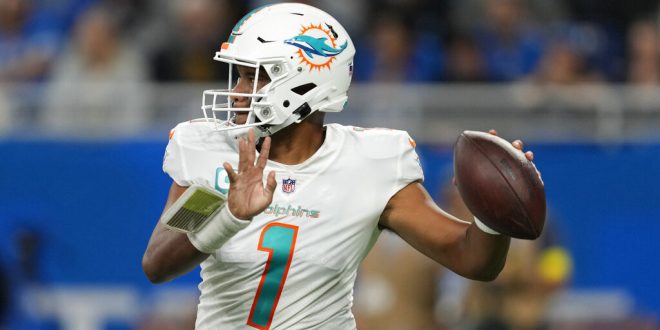 Miami Dolphins quarterback Tua Tagovailoa throws during the first half of an NFL football game against the Detroit Lions, Sunday, Oct. 30, 2022, in Detroit. (AP Photo/Paul Sancya)

The Miami Dolphins are now 5-3 on the season after beating the Detroit Lions 31-27 on the road on Sunday.

Tua Tagovailoa had a big game for the Dolphins; the Fins QB racked up 382 yards and tossed three touchdowns in the comeback victory.

This is Tagovailoa’s first 300 yard passing performance since Week One against the Ravens and he posted his highest completion percentage at 80%.

His favorite targets on the day were Tyreek Hill and Jaylen Waddle. Hill posted 188 yards on 12 catches but Waddle scored all the points as he had two touchdowns while also tallying 106 yards on eight catches.

Miami’s defense had a really rough start as they gave up 27 first-half points. Jamaal Williams had two touchdowns on the ground and Jared Goff added a passing touchdown to D’Andre Swift.

The Lions have now fallen to 1-6 on the season and are last in the NFC North.  Detroit led by as many as 14 points in this game but could not hold the lead.  Detroit has given up at least 20 points in every game this season. They have not seen the win column since Week Two.

Lions coach Dan Campbell spoke after the game about how close his team is to being a good team.

Miami looks to go on a three-game win streak for the second time this season as they travel to Soldier Field to take on the Bears.

Detroit looks to end its five game losing streak with a game at home against The Green Bay Packers.

Both games are set for a 1 p.m. kickoff.