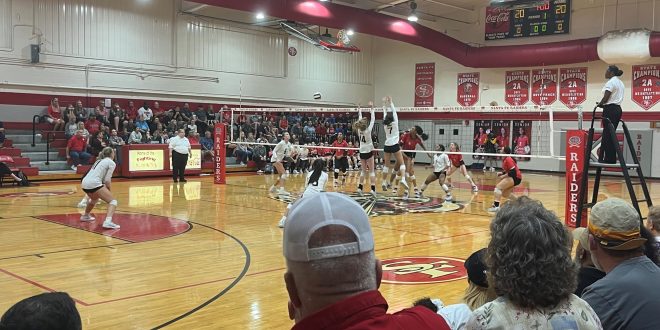 The Santa Fe Raiders taking on the Bishop Moore Hornets in set 1 of Tuesday's match.

Bishop Moore started the set on a three-point lead, but the Raiders answered quickly with a Jayln Stout kill to put Santa Fe on the board. After each squad scored a few points, the Raiders went on a 7-0 run to erase a three-point Hornet lead. The Hornets then responded by scoring six of the next eight and tying the game up at 15 a piece. After Santa Fe extended to a two-point lead, Bishop Moore scored four consecutive points. The Raiders found lightning in a bottle and scored five straight. Leading 23-21, the Raiders swiftly finished the Hornets by scoring the last two.

The Santa Fe Raiders Varsity Volleyball team won the first set of tonight’s Regional Finals game 25-21 against Bishop Moore. This is sure to be a back and forth match up. pic.twitter.com/uWF3nUE1IO

Bishop Moore Tries to Fight Back in Set 2

After dropping Set 1 to Santa Fe, Bishop Moore scored the first two points in the second set. The Raiders and the Hornets then tied the score nine times. The match was particularly competitive as the teams neared the 25-point mark, tying the score at 17, 19, 21 and 22. However, after Stout scored the 22nd point, Santa Fe was able to keep the Hornets at bay, scoring three more unanswered points to take the set.

Santa Fe opened the third set by scoring the first two points. After the teams went back and forth to score two points each, the Raiders extended their lead to six with a dominant performance from Stout again, who was responsible for four of Santa Fe’s seven points.

A Bishop Moore point later, Camille Johnson scored two straight to give Santa Fe a 9-4 lead. With their backs against the wall, the Hornets were not going down without a fight, as they scored five straight to tie the set. But the combination of Joselynn Sanjurjo, Stout and Anisia Dorlouis was too much for the Hornets. The Raiders increased their lead to eight after they scored nine of the last ten.

A short run by the Hornets gave them hope of coming back in the set, however, two straight aces by Olivia Beavers put the set out of reach for Bishop Moore. Two defensive blunders by the Hornets sealed their season, with the Raiders sweeping the Hornets in three sets.

The Santa Fe Raiders move on to the State Semifinal match Friday. If they win that match, they will advance to the State Championship on Nov. 12.