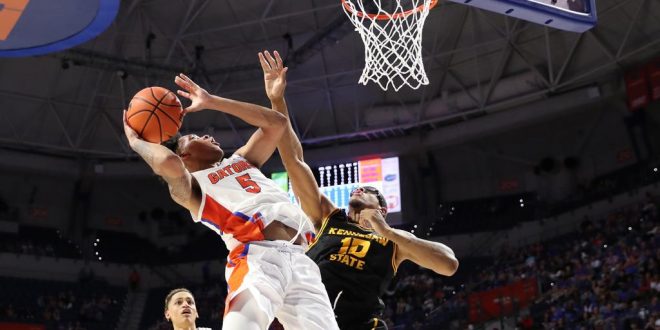 The Florida Gators men’s basketball team will return to the Stephen C. O’Connell Center to host the Florida Atlantic University Owls in episode three of the Golden era on Monday. Tip-off is set for 7 p.m. The Gators have gotten off to a 2-0 start to open the 2022-2023 season under first-year head coach Todd Golden with an 81-45 win over Stony Brook in the season opener and an 88-78 victory over Kennesaw State on Friday.

In Florida’s last game, the Gators took down Kennesaw State on a night where forward Colin Castleton put up a career high 33 points, nine rebounds and three blocks.

Castleton passed Udonis Haslem (1998-2002) and is now No. 9 on the UF all-time list with 123 career blocks. The two-time All-SEC performer is also just four points from reaching a total of 800 points during his time with the Gators.

Castleton is shooting 60% from the floor, drawing fouls at a high rate (6.9 per game), and has recorded a .730 combined free-throw percentage during his first two seasons with the Gators. The Florida standout continues to be the leader of a Florida team that is showcasing new talent as well.

Gator Sophomore guard Will Richard is shooting 67% overall, 50 from the three-point line (306) and 100 from the free-throw line (6-6). Richard followed Castleton, putting up 15 points against Kennesaw State.

Florida’s starting lineup will likely remain unchanged from the first two contests, with Kyle Lofton, Richard, Kowacie Reeves, CJ Felder and Castleton first stepping foot on the hardwood. In addition, Alex Fudge, Myreon Jones and Riley Kugel look to be a consistent trio of rotational pieces for the Gators, with Trey Bonham and Jason Jitoboh entering the game when necessary.

A Look at the Owls

The Gators will face an experienced FAU squad, as the Owls have four starters and their top six scorers returning for the 2022-2023 season. The Owls will enter the contest 1-1 on the season after beating Lynn in an 81-46 win in their home-opener.

In its last time out, FAU fell 80-67 to the Ole Miss Rebels. The Owls hung on to a seven-point deficit with 2:11 left in the game, but the Rebels closed it out scoring the final six points of the game. The Owls shot 41.8% while the Rebels shot 50.8%. Florida Atlantic was outrebounded 40-31 and outscored in the paint 42-28.

Despite the loss to Mississippi, Florida Atlantic standout Vladislav Goldin collected 19 points and nine rebounds. The 7-foot-1 center leads the Owls’ offense, averaging 13.5 PPG and six RPG. Goldin will present a challenge for the Gator defense, that will look to bounce back from a lacking in defensive performance against Kennesaw State.

Florida Atlantic is entering its fifth season under former UF associate head coach Dusty May, who worked alongside former head coach Mike White during the 2015-2018 seasons. May currently holds a 67-57 record with the Owls, a team that went 19-15 last season. May’s familiarity with Florida’s program and personnel will provide the Owls with an advantage as they enter the contest.

The Gators will look to pick up a win over the Owls to cap off a three-home game opening stretch on the season.

Ellie is a third-year sports and media journalism major at the University of Florida.
@ellie_shreve
Previous Bucs Outlast Seahawks 21-16
Next Pat Dooley’s Back Nine (November 14th)