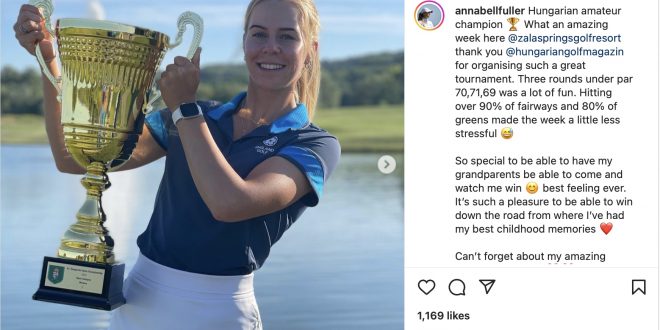 FEATURE: Amateur to Accomplished: How Annabell Fuller is making a successful Golf career as an International Player

Annabell Fuller grew up playing golf. First, she followed her sister, Samantha, to all of her tournaments. Then, she started playing with her, in small junior tournaments, in London, England.

At 14 years old, Fuller was the only girl to break par in the under-18s tournament at the Sir Henry Cooper Junior Masters.  That is when she decided to pursue golf more seriously.

Throughout high school, Fuller’s wins got more impressive each year—even when she was still playing golf only for the fun of it. Claiming the English U16 Girls Championship in 2017 and the Major Champions Invitational in 2019—the year that she moved to the US to pursue golf further—she enjoyed the game even more, enough to think about going to college for it.

Congratulations to Annabell Fuller and Conor Gough, both of England on your Championship wins at the "Major Champions Invitational" at Bella Collina. This is Sir Nick Faldo's 2nd year for hosting this event…. https://t.co/wlahq9WjD1

More than 10% of the U.S. population plays golf according to Golf Business Partners CEO, Francisco Aymerich. In the UK, only about 5.9% of people play the sport actively. Seeking more opportunities to play golf, Fuller moved across the pond to Florida.

“I’d been here a lot already,” she said. “Obviously the weather is better, a lot better and I kind of like the winter time here than back home so it was quite easy to want to go to a better environment to play.”

Moving to Florida also came with selecting what school to attend to pursue her golf career. She chose the University of Florida.

“When I came to visit, I just absolutely loved the environment here, so it was kinda an easy, easy decision,” she said.

Fuller enrolled at the University of Florida at the beginning of spring 2020, right before the COVID-19 pandemic upended society. Her first two months in Gainesville allowed her to experience being on a golf team for the first time.

“It was so nice being around other people who wants to practice the plane, not going to tournaments by ourselves,” Fuller said. “Being in that community is nice. They’ve become my best friends.”

In her first season with the team, Fuller appeared in the Gators’ lineup in all the spring events played before COVID-19 canceled the rest of the season. She recorded a 73.44 scoring average over nine rounds played. Her best finish was at the Gators Invitational where she tied for third individually.

One Year Under Her Belt

UF’s home tournament has been pivotal in Fuller’s young career. It is where she got her highest finish in freshman year and where she won her first collegiate tournament in her sophomore year.

A joint best of the week 66 in the final round took @annabellfuller1 (-5) to the individual title at the Florida Gators Invitational. Playing at home her @GatorsGolf team successfully defended their five consecutive titles finishing tied 1st.
Full Results: https://t.co/GXNPOa5XfQ pic.twitter.com/jANXfYkqN9

Fuller recorded a team-low 72.68 scoring average as a sophomore. She also finished in the top 25 of five tournaments, tying for a team-high with Spaniard Marina Escobar.

Considering competition opportunities that come with playing for a #16 ranked school, Fuller is happy with her decision to move to the United States.

“It gave me the ability to play against play better players.” Fuller said. “I know a lot of other Europeans and even girls from Asia come out to school here, so you get to play the tournament against them, which I wouldn’t have done if I was back in England.”

Her strong performances in collegiate tournaments have opened doors for her around the world. She received invitations to the prestigious Scottish Women’s Amateur Championship and Augusta National Women’s Amateur, and she became the Hungarian amateur champion last July. 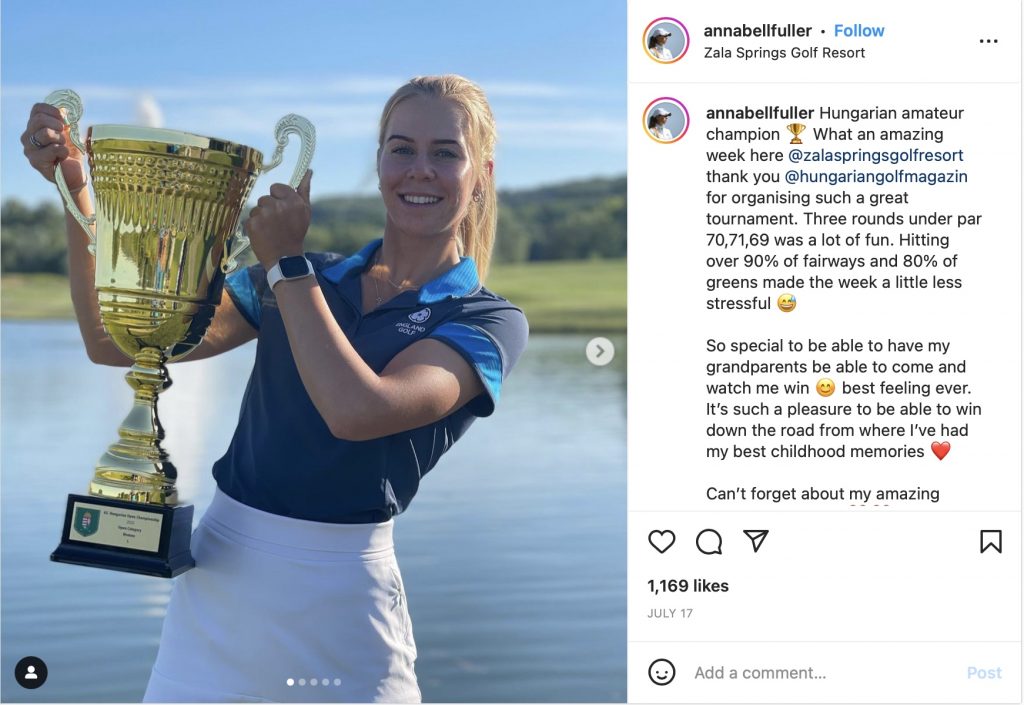 Fuller had her best season thus far in her junior year. She tied her career-low round shooting 6-under-par in the spring opener at Florida Atlantic University and closed out the regular season with a T4, T3 and runner-up outings. Shooting 11 rounds under-par, the third best on the team, she recorded an overall stroke average of 72.60. She also won her quarterfinals match 4&3 at the SEC Championship.

As Fuller approaches the end of her college career, she is already starting to reflect on her time at the University of Florida.

“I won our home tournament, so that was obviously a really good achievement,” she said. “Otherwise, having different trips with the team and winning team events is always fun, or going to game days as well, there’s nothing like that back home.”

This past summer, Fuller was ranked in the top 50 amateurs in the world. She plans to turn professional after she graduates with her degree in English language and literature in the spring, and she has a head start having already played two majors: the Women’s British Open in 2021 and the US Women’s Open in 2022.

Before playing more, she is looking forward to having some fun and collecting more victories as she closes out her senior year as a Gator.