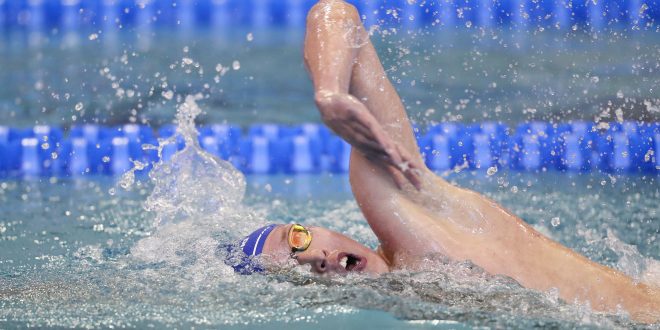 From the first time he swam competitively, Oskar Lindholm knew he wanted to come to America to swim in college. Swimming has been the Dane’s passion his whole life.

One of Lindholm’s biggest draws to making the trip overseas was how different the culture was and the hope that the move could help him progress in his sport.

At the University of Florida since 2021, Lindholm appreciates the amount of effort his fellow Gators put into practicing their chosen sport.

“Back home, I thought that I was a hard worker,” Lindholm said, “but like, the biggest difference was that here I’m on a team where 40 other guys, they work just as hard as me. The will to work hard is really something that is special about this place.”

Lindholm was one of the best swimmers in his home country. In the US, he is not even the best on his team.

“To go somewhere that I wasn’t the best when I joined the team, I want to be pushed in practice, and I feel like I get that here,” Lindholm said.

Growing with the culture

Both of Lindholm’s parents know America well. His father also swam for an American college and his mother is from Massachusetts. Thanks to this, American culture was not as big a shock to him as it can be to most international students.

That helped comfort him in his choice to move to the US for college.

Despite his familiarity with American culture, some things still stood out to him, namely also differences in how he experiences his own sport.

“The facilities, the training partners you can get over here… it’s just, on another level compared to back home,” Lindholm said of the opportunity in the US.

He also mentioned, “all the tailgates and stuff like that” that surround the Gator football home games as tailgating does not exist in Denmark. And he said that the cliche “everything is bigger in America” has more truth behind it than he expected.

“People may think of swimming as an individual sport because when you’re in the water, you’re by yourself,” Lindholm said about swimming with a roster of teammates, “But it’s such a big team sport. I wouldn’t be able to train as much as I did or swim all those yards if it wasn’t for the team.”

Lindholm joined the Florida Gators Swimming and Diving team as a freshman. He immediately got to work and loved the team atmosphere.

He has also gotten immersed in being a member of the team. Lindholm lives with three roommates, all of whom are also his teammates.

“It’s a great group of guys, we all support each other, in and out of the pool,” Lindholm said.

In his freshman season, the Gators performed well in the national Championship, medaling and winning some of the events while finishing third at the NCAA Championships. They also won the SEC Championship for the 10th time in a row. 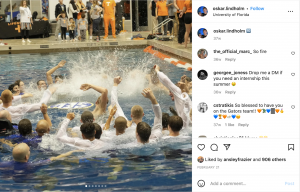 Coming into this season, the team has a lot of momentum from last year’s success and successful recruiting. Lindholm called the incoming freshman class “super talented.”.

“I feel like we have a good shot at fighting for a national title,” Lindholm said.

Now in his sophomore season, he notices differences from the same time last year. He can feel he is no longer a freshman.

“Instead of having to adapt to a new system, I know what to expect. So I can just focus on swimming fast, which definitely has shown in practice.”

Lindholm has two dreams left to accomplish in his swimming career.

Jensen Young is a journalism student at the University of Florida. He works as a sports writer for WRUF.com and is the voice of trendings on Wednesday mornings on the WRUF radio station.
@Jensen_Young9
Previous Alabama takes on Austin Peay
Next Columbia Faces Escambia in Regional Semifinals