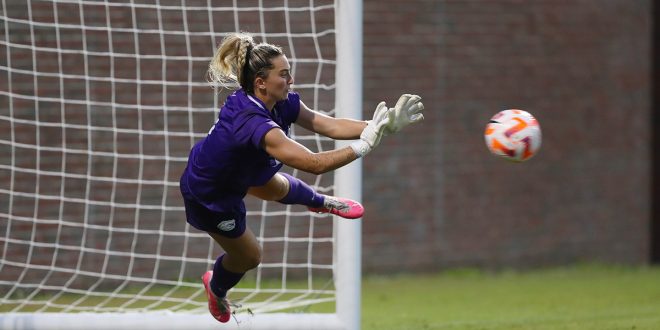 Alex Goldberg dives for the ball at the match against Tennessee on Sept. 16. The Gators lost 2-1. Photo from @GatorSoccer on Twitter.

The Gators ended their 2022 season with the worst record in program history. Despite a disappointing season for first-year head coach Samantha Bohon and the Gators, the team will look ahead to next season with a fresh start and new faces.

Bohon welcomed her first signing class on Nov. 9, consisting of eight athletes from across the country.

Lena Bailey, a forward from Tampa, Florida, has found success within her club and high school teams.

Her club team, Tampa Bay United 04/05 ECNL, made it to the final four in Nationals in 2021. Bailey has been a key goal scorer for her high school team, Tampa Catholic. She scored 31 goals as a freshman, 10 as a sophomore and 23 as a junior. So far, with three games played as a senior, she has recorded two goals.

Paris Bice is a goalkeeper from Gainesville, Florida. Bice has been in net for various ECNL and DA teams. However, most recently, she competes for Charlotte Soccer Academy 04/05 ECNL while attending Alachua eSchool.

Elyse Campbell is a midfielder from Windermere, Florida. Her club team, Florida Krush ECNL, made it to ECNL National Playoffs this year. The midfielder competed for Buchholz High School before playing for Olympia High School as a junior and senior.

While a freshman at Buchholz, Campbell was named to the Sun All-Area Second Team 2019-20.

Sami Fisher is a forward/midfielder from Scottsdale, Arizona. She plays club for Phoenix Rising ECNL and high school soccer for Chaparral High School.

Fisher has collected various accolades. She is ranked a four-star recruit by Top Drawer Soccer and she is the leading goal scorer on her club team, among other recognitions.

Megan Hinnenkamp is a defender/forward from Kearney, Missouri. She plays for KC Athletics U19 Girls ECNL and Liberty North High School. Notably, she was named to the ECNL Midwest Conference First Team.

Hinnenkamp was named a 2021-2022 High School All-American by United Soccer Coaches. Also, she was the 2022 4A Co-offensive Player of the Year and part of the All-State first team, voted by the Missouri Soccer Coaches Association. The Gators soccer commit was also named the 2022 Liberty North Athlete of the Year by Courier-Tribune.

Her high school team was the 2022 Florida High School Athletic Association 7A champion. Upton was a necessary asset to the team in the championship game, as she aided in both creating scoring chances and holding down the defense.

She was also named to the 2021 and 2022 St. Johns-Flagler-Volusia All-Area First Team and St. Johns All-County First Team.

Paloma Peña is a goalkeeper from Miramar, Florida. She plays for Tampa Bay United ECNL and her high school, Archbishop Edward A. McCarthy.

Notably, Peña was part of the Dominican Republic National Team, where she played in the 2022 CONCACAF U-20 and U-17 championships.

Congratulations to Faith Espiritusanto, Jazmin Herrera, Paloma Pena, and Bella Ventura from our Women's Varsity Soccer Team. These young women have been chosen to play on several different national teams for the Dominican Republic in the 2022.. https://t.co/n2g7CfweLN pic.twitter.com/oM2ZYtdTWX

She was also selected to be a part of the 2022 ECNL New Jersey National Selection Games.

Amelia Malkin is a forward from Sarasota, Florida. She currently plays at IMG Academy, but previously attended Riverview High School.

While attending Riverview High School, she amassed a few achievements. She was a 2021 All-Star nominee, part of the 2020-21 Florida Athletic Coaches Association All-State team and part of the Herald Tribune 2020-21 All-Area Team Selection.

With this being Bohon’s first recruiting class, the future looks bright for the Gators.