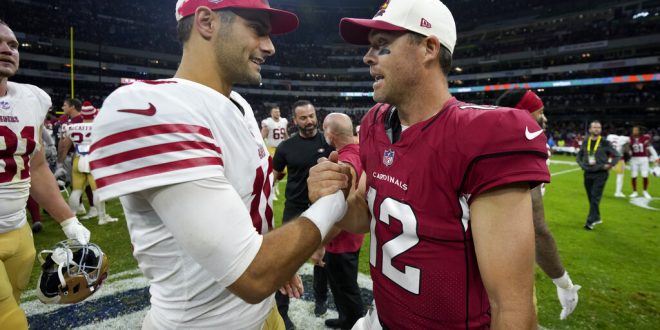 It was a Monday night mauling in Mexico City as the San Francisco 49ers beat the Arizona Cardinals 38-10.

The 7,200 foot elevation at Estadio Azteca was no problem for the Niners. The team spent part of the week training in Colorado to prepare, which players said paid off.

The rushing attack was strong as well. Deebo Samuel found his way to the end zone on the ground as he finished with 37 yards on three attempts. Elijah Mitchell led the team with 59 yards on nine carries.

Christian McCaffrey was an absolute all-purpose nightmare. He finished with 39 yards rushing on seven carries and tied Samuel with seven receptions. He edged out Samuel in receiving yards, gaining 67 to Deebo’s 57.

Falling off a Kliff

The Arizona Cardinals gave former number one overall pick Kyler Murray a massive extension before the season started, but the fruits of his labor have been rotten in 2022. The quarterback has missed each of the last two games, with former Texas Longhorn star Colt McCoy starting in his place Monday.

McCoy completed 24 of his 34 attempts and threw an interception. The rest of the team’s stats were largely unimpressive.

Despite that, the receivers had a big, if unimportant night. Greg Dortch finished with 103 yards on nine receptions, while Deandre Hopkins added nine receptions for 91 yards.

The team will try to seek refuge from its woes on Sunday when it hosts the Chargers.