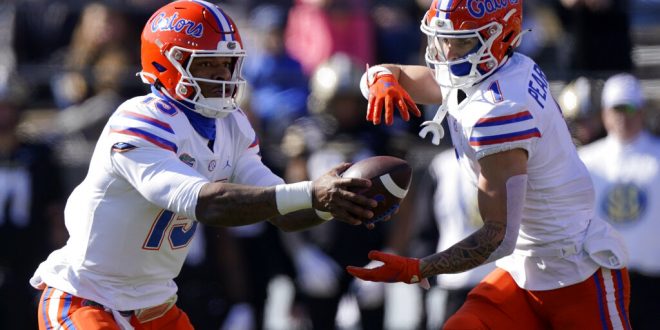 Florida quarterback Anthony Richardson (15) hands off to Ricky Pearsall (1) in the first half of an NCAA college football game against Vanderbilt Saturday, Nov. 19, 2022, in Nashville, Tenn. (AP Photo/Mark Humphrey)

The Gators and Seminoles faceoff in the 66th edition of the Florida-Florida State rivalry on Friday. The Gators have won three straight Sunshine Showdown meetings, although they head into Tallahassee with a meager 6-5 record after losing to Vanderbilt on Saturday.

Florida State has certainly been the more impressive team this season coming in at 8-3, aside from the three-game-losing streak they encountered midway through the year. Here’s what to expect on Friday.

Heading into their matchup with the Gators, Florida State faced off against Billy Napier’s former team in the likes of the Louisiana Rajun Cajuns.

How big of an advantage is it for the Seminoles?

Michael Desormeaux is the current head coach at Louisiana in his first year, but he spent several years as an assistant to Billy Napier. Florida State play-by-play announcer Jeff Culhane said it should be interesting to see how much the schemes overlap, but nonetheless expect some “wrinkles” from both teams.

Florida State was wrapping up a tough season when they came to Ben Hill Griffin Stadium at the end of last season. The Gators will meet a new and improved team in Tallahassee, this year.

In particular, Florida will have to contain a confident Seminoles quarterback in Jordan Travis.

“From what you guys saw a year ago at the end of that year, to what he’s doing right now as a passer is night and day,” Culhane said.

The Gators will have their hands full with Travis and the rest of the Florida State offense that has found their stride.

The Gators have had some very close losses throughout the season, which has led to built up frustration.

“It can be frustrating at times, especially when you consider how close we were,” offensive lineman O’Cyrus Torrence said. “I tend to look at it as more of a learning experience instead of letting it be frustrating.”

Despite team-wide frustration after losing the game against Vanderbilt, the team “put it to bed” and used it as a means of preparing for Florida State.

Last year, the Sunshine Showdown was a battle of 5-6 teams, with the winner earning bowl eligibility. This year, both teams are simply jockeying for a better bowl game.

While the stakes are not as high and there are no College Football Playoff or conference championship dreams on the line, the Gators and Seminoles will be ready to go. Each year, this game looms in the distance on the schedule with both teams hoping they can be the “top dog” in the state.

For Gainesville native and Gators quarterback Anthony Richardson, it is just that.

“[It’s] a big game for the state of Florida,” he said. “We definitely have to bring it this week.

Torrence, who similar to Napier will make his UF-FSU debut Friday, added on to the importance of winning this game for the future of the program.

The Gators and Seminoles wrap up their regular seasons from Doak Campbell Stadium on Friday at 7:30 p.m.

Matt is a third-year journalism major specializing in sports media and is also completing a sports management certificate. He also participates in sports broadcasting.
@MattQuartararo
Previous Bartram Trail Bears To Host Buchholz Bobcats in Regional Final
Next Former Gator Hoopers Continue to Thrive in the NBA