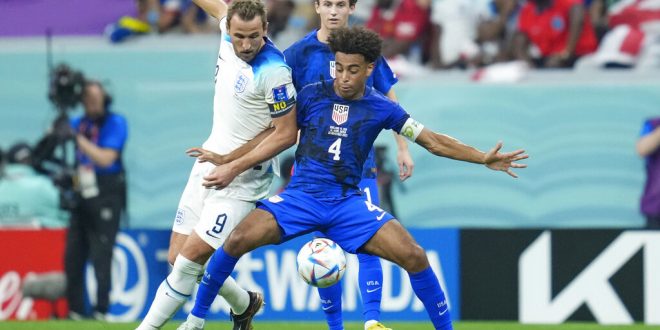 England's Harry Kane, left, and Tyler Adams of the United States fight for the ball during the World Cup group B soccer match between England and The United States, at the Al Bayt Stadium in Al Khor , Qatar, Friday, Nov. 25, 2022. (AP Photo/Ashley Landis)

Matchday two’s results in World Cup Group B can be boiled down to one word: unexpected. Iran was able to beat Wales with a momentous pair of goals in extra time, propelling the Middle Eastern nation back into knockout round contention. Later on in the day, the United States was able to steal points from an intense battle with England. The Americans almost secured the upset but came just short.

The USMNT tied England 0-0 in their Black Friday match, keeping them in contention for a spot in the World Cup knockout round.

A Match To Build On

The match started off slow for the American side, with England looking strong. England striker Harry Kane had an early chance from a Bukayo Saka pass inside the box, which USMNT defender Walker Zimmerman deflected. After that the United States settled in, growing more confident as the match went along.

A HUGE block from Walker Zimmerman denies Harry Kane a clear look at goal. 0-0 after 10 minutes

England seemed unprepared for the United States’ energy, as the American side constantly pressured throughout the match. Coach Gregg Berhalter chose to deploy a 4-4-2 formation rather than his standard 4-3-3. Midfielder Weston McKennie was shifted outward to right midfield. Christian Pulisic, who won man of the match, took the left. This allowed the USMNT to have a consistent defensive block with pressure on all sides. Haji Wright and Tim Weah started up top, keeping pressure on England’s defense.

The United States kept this pressure on throughout the first half. The American squad had several huge chances in this half, including a Christian Pulisic shot that careened off the crossbar.

WHAT A SHOT by Pulisic!!!

The USMNT was this close to taking the lead! pic.twitter.com/HTAs0gyshf

This momentum carried into the second half, where the USMNT continued to keep their clean sheet. Substitutions Shaq Moore and Brendan Aaronson maintained the defensive intensity, and the American side were able to hold on for the draw.

“We were all in. We were more dangerous,” said McKennie.

“I feel like we were on our game today. We had so much energy and determination,” said USMNT midfielder Yunus Musah.

The defensive backline shined bright for the American side today. Centerbacks Tim Ream and Walker Zimmerman were crucial in stopping several English chances throughout the match. Leftback Antonee Robinson locked down Saka throughout the match, while also creating a plethora of attacking chances. Tyler Adams, as always, starred in defensive midfield for the United States.

Goalkeeper Matt Turner also had a fantastic day. The Arsenal keeper made several fantastic saves throughout the match to maintain a clean sheet.

“We’re proud but our works not done. We have to win on Tuesday,” said Berhalter following the match.

The USMNT now control their own destiny leading into Tuesday’s match against Iran. The USMNT sits in second place, one point behind the Iranian side. A win would mean the United States advances to the knockout round, but a loss or tie would mean elimination.

The United States will play their third group stage match Tuesday against Iran at 2:00 PM. The loser leaves town.

Connor O'Bryan is a world soccer reporter for ESPN Gainesville. He also sometimes covers baseball and other sports. He has previously written for WUFT Gainesville and for Atrium Magazine. Connor also cohosts the "Off The Bar Podcast", a student driven podcast that focuses on the global soccer landscape.
@ConnorOBryan3
Previous Florida Volleyball Clinches SEC Title
Next Big 12 Title Game Set