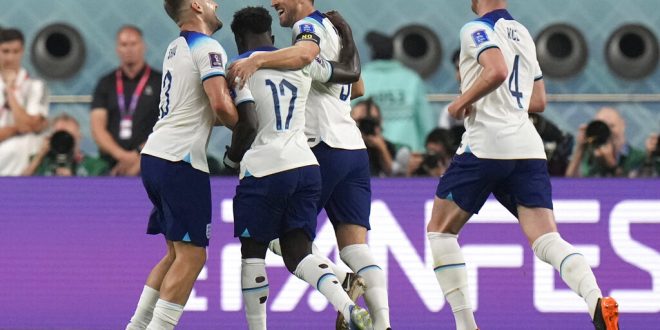 This year’s World Cup in Qatar figures to be hypercompetitive. While no team has an easy path to the final, some groups are harder than others. These groups of death mean anyone can escape to the knockout round. Group B is one such group of death.

Group B action in the World Cup kicks off today. England and Iran will open play in the morning, and Wales and the United States will wrap up the action in the afternoon.

Each of these squads have the talent to move on to the knockout round and these matches figure to carry a high level of competition.

England is the betting favorite to win Group B but it doesn’t mean the English squad will have an easy time getting there.

England will be without it’s presumptive starting fullbacks, Chelsea stars Reece James and Ben Chilwell, in Qatar. Both will miss the tournament with leg injuries. This leaves Gareth Southgate’s squad with a clear hole defensively, one that could easily be exploited by speedy wings from the United States and Wales.

England was able to breeze through World Cup qualifying, earning 26 points in 10 matches. However, they have been disappointing with their more-recent form. England was only able to capture three points from six Nations League matches. While they did have a difficult group, three points from a World Cup favorite is disappointing. Hungary was a member of Group A3 alongside the Three Lions, and the fact that they could not take all six points from a lower leveled squad should concern English fans.

Southgate’s squad should still easily win this group and are practically guaranteed knockout round advancement. However, it would not be a shock if one of the other three teams in this group steal enough points to send the English squad home early.

This is the most promising World Cup in ages for American soccer fans. The United States failed to qualify for 2018’s World Cup in Russia and anticipation has been building around an exciting young squad.

Although there were a slew of roster questions surrounding Gregg Berhalter’s squad, USMNT supporters should still be pleased with the roster as a whole. Berhalter figures to deploy his staple 4-3-3 defensive formation, with the McKennie-Adams-Musah midfield flanking star forward Christian Pulisic.

The question of several starting spots, including centerback, striker and right wing will likely be worked out during this period. Tim Ream and Aaron Long should rotate next to Walker Zimmerman in defense, and right wing figures to be a matchup-based mix of Gio Reyna and Tim Weah. The striker spot is up for grabs.

The USMNT has had a disappointing run as of late. While they did easily qualify for Qatar’s World Cup, the United States skated through late qualifiers. Furthermore, the squad looked lifeless in recent friendlies.

Gareth Bale is a lot like Tom Brady in major tournaments; it’s hard to bet against him.

The Welsh squad, while not stocked to the brim with talent, will put up a strong fight against the other teams in Group B.

Wales features a pacy attack centered around attackers Kieffer Moore, Dan James, Brennan Johnson and Bale. This pace should exploit weakened English and American backlines and should have no trouble scoring goals.

Wales’s main problem will be containing the other squads. The ancient Wayne Hennessey figures to start between the sticks. The backline is relatively inexperienced and will likely have a hard time against capable attackers like Harry Kane. These matches could go either way for the Welsh squad.

Wales will be a fun squad in this tournament, but it is doubtful they make a serious run.

Iran looked to be a promising team a few months ago. This was before a wave of controversy struck the squad.

Iran has been rocked by country-wide protests. Many members of the Iranian National Team are in favor of these protests, pitting themselves on a public platform against the Iranian government. This divide led to Iran naming a 25-man squad, choosing to have one roster spot left open. Several players were reportedly left off the squad, all because they were in support of anti-government protests. Iran even chose to carry a fourth goalkeeper rather than bringing any outspoken outfield players.

Given everything going on with the nation, Iran will likely finish last in the group. But this is a squad that could rally and steal points across the board. This Iranian side could shock the world and finish higher than expected.

Connor O'Bryan is a world soccer reporter for ESPN Gainesville. He also sometimes covers baseball and other sports. He has previously written for WUFT Gainesville and for Atrium Magazine. Connor also cohosts the "Off The Bar Podcast", a student driven podcast that focuses on the global soccer landscape.
@ConnorOBryan3
Previous Heat Struggles Continue With Loss to Cavs
Next Valby Ends Season On High Note