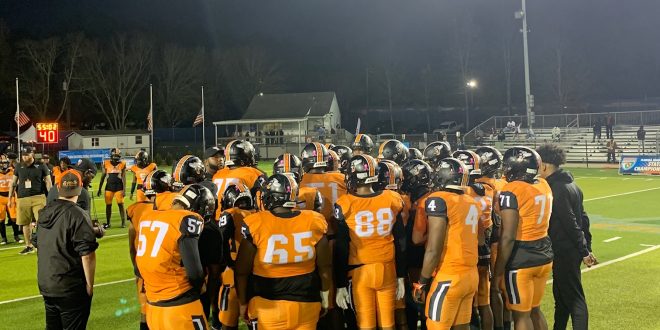 The Hawthorne varsity football team will play Blountstown for their playoff game in the FHSAA Football State Championships. The semifinal is on Friday at 7:30 p.m.

The location of the game is currently under discussion after an on-field altercation occurred at the Hawthorne stadium against Pahokee and concerns about safety were raised. Officials from Hawthorne High School have met with FHSAA, and there is a possibility of the game being moved to Citizens Field in Gainesville.

Where do they stand?

Blountstown is coming off their playoff win against the Sneads Pirates. They won 49-14 last Friday. Hawthorne just barely advanced past Pahokee Blue Devils last week with a final score of 21-20.

Coach Ingram is ready for playoffs

Head Coach for Hawthorne, Cornelius Ingram, said that Blountstown plays “hard nose football.” He said he’s got to keep an eye on their star receiver as well as their quarterback and running back.

As a Hawthorne graduate himself, Ingram said he’s excited for the upcoming game. He said most of his coaching staff are Hawthorne graduates as well. Therefore, making the playoffs means something to the entire team.

Ingram addressed whether or not the game will remain at home and said they are still trying to decide where to hold the game. He said there are safety concerns for their home stadium, but he hopes that it will be held at Hawthorne for the home advantage.

Hawthorne is a small town, and Ingram said there’s a lot of pride being from a small town. He said the whole town shows out for the football games.

Ingram said he has received lots of phone calls from parents and friends simply because they care about the team and the town.

“It just means a little bit more because most of the time, this is all the kids really have,” Ingram said.

Following a convincing 28-0 win on Friday night, the Hawthorne Hornets are making their third …