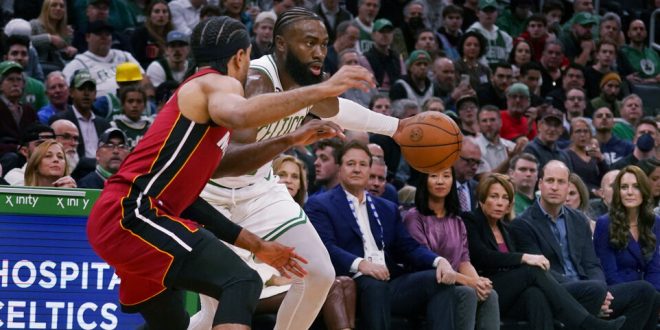 Britain's Prince William and Kate, Princess of Wales, at right, watch as Boston Celtics guard Jaylen Brown drives to the basket against Miami Heat guard Gabe Vincent (2) during the first half of an NBA basketball game, Wednesday, Nov. 30, 2022, in Boston. (AP Photo/Charles Krupa)

The Miami Heat kissed their three game win streak goodbye last night after a 134-121 loss to the Boston Celtics. The Heat held true to their name catching fire on offense in this high-scoring affair, however, the story of the game was three-time NBA all-star Jayson Tatum.

Both team’s combined for a whopping 255 points Monday in an efficient scoring night on both ends.

Miami knocked down 52% of their shots, going 47/90 from the field. 18 of those makes came from outside the arc as the team caught fire, shooting 45% from deep. Their offense transitioned to the stripe, as the Heat coined in all nine free throw attempts. Bam Adebayo, Tyler Herro, and Max Strus led the scoring for Miami. Despite their strong performance on offense, Miami was unable to keep up with Boston, who sit atop the league’s standings.

The Celtics fought fire with fire, shooting 55% from the field and 49% from outside. Boston shot 14 more free throws than the Heat last night, knocking down 20 of 23. However, Jayson Tatum was key to the Celtics’ success. Last year’s Eastern Conference Finals MVP dropped 49 points, 28 of which came in the first half. He brought the heat, to the Heat, from outside knocking down 8 of his 12 attempts. He added in 11 rebounds to support his dominant performance.  Jaylen Brown added support to the win with a 26-point performance.

Despite suffering this tough defeat, Miami will have the opportunity to make up for it against the Celtics again on Friday. Miami currently holds a 10-12 record with some early season struggles. They hope to have four-time all-star Jimmy Butler back for their next matchup with Boston. Jimmy has missed seven straight games, sidelined with knee issues. Miami sits in the eleventh spot in the eastern conference and will look to get back on track with a get back win against Boston.