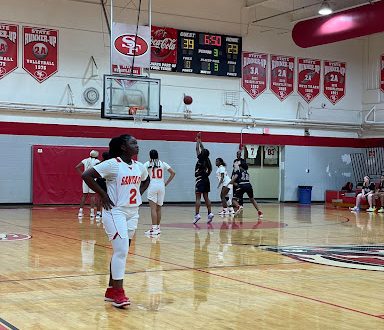 The Santa Fe Raiders fell behind early in the game Wednesday night.

The Raiders opened the scoring, getting the first four points on the board. Columbia quickly fought back, however, with Eriel Baker making both her free throws. Both teams struggled to hold onto the ball and both defenses made impressive steals driving the ball back to their basket; however, most shots were unsuccessful. The Tigers scored 7 points before Emmoney Scott scored a free throw to bring the score to 7-5 with Columbia still in the lead. However, the free throw did not change the direction of the game for Santa Fe. The Tigers went on to score 10 more unanswered points. Columbia knew how to work the court utilizing all of their players to maneuver around the Raiders’ defense. The first quarter ended with Columbia leading 17-5.

Chohan opened the scoring in the third period. She then made another basket in response to the Tigers putting up 6 points. Scott followed by making a basket as well, bringing the score to 43-29. The Columbia Tigers did not let up, and were only helped by missed free throws and baskets by the Raiders. However, the Raiders did not show a sign of defeat and retained a highly physical game. By the end of the third period, the Tigers had eight fouls and the Raiders were just behind them with five. The Tigers retained their strong lead through the third period, taking a score of 55-30 into the final quarter.

The Tigers got off to a good start in the fourth quarter, making the first basket of the period. They then scored another basket after two missed free throws by the Raiders, bringing the score to 59-30. Santa Fe still refused to give up. Scott made both her free throws just under the 6 minute mark, and a couple more baskets and a free throw by Davis brought the score to 59-39. Unfortunately, they were not able to keep their momentum. Columbia brought the score to 68-39, during which time Santa Fe missed 4 free throws. Santa Fe got back in the scoring with a basket and two free throws by Chohan for their final points of the game. A final free throw by Columbia brought the final score to 69-43, with the Tigers walking away victorious.

The Tigers fought their way to a winning record Wednesday night, and the Raiders fell to 0-2. Next, the Raiders will face Newberry High School on Tuesday, December 6th, as they hope to earn their first win of the season.