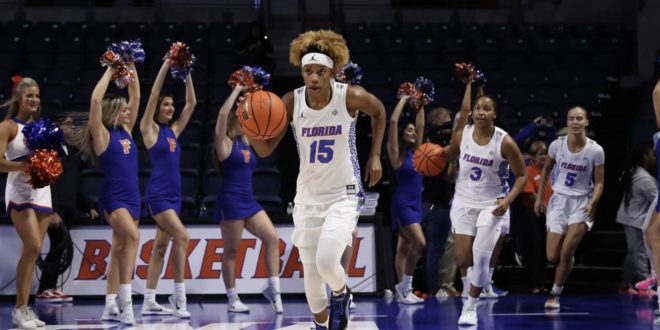 Nina Rickards takes the ball down the court in a game against Prairie View A&M on Nov. 30, 2022. (Ashley Ray/UAA Communications)

The Gators are currently on a four-game winning and have only lost to Florida State this season so far. They started the season off hot with a three-game win streak. They recently took wins over Green Bay and a nail-biting overtime victory against the University of Houston during the St. Pete Showcase last week. A few days prior to that, they beat Furman and Bethune Cookman University.

The beginning of the game showcased quite the momentum from the Gators. Throughout the first quarter, Florida lead the way by as many as 13 points thanks to a few key players. They turned to sophomore Alberte Rimdal, KK Deans, and Nina Rickards for four three-point shots.

Rimdal is transforming to be a strong asset to the team. She is averaging 6.1 points, 2.1 rebounds and 1.6 steals. As for her minutes, they have increased from 16.1 to 25.3 this season.

Senior players Deans and Rickards have been showing up with stellar performances lately. They both lead in scoring against the Panthers with 16 points apiece. Deans helps the team in assists with 3.6 assists per game. As for her averaging statistics, it totals up to 12.9 points, 3.4 rebounds, 2.4 steals and 45.5 3P%. During the team’s game against the University of Houston, Deans shot 19 points and five assists.

Rickards also knows how to come out big. She shot seven points at the final quarter, which ultimately forced Prairie View A&M to fall behind. This guard is averaging 6.6 rebounds, 2.6 steal and 11.7 points per game.

Another big player in Wednesday’s game was Taliyah Wyche, a 6-foot-3 inch sophomore forward. She lead in points the whole second half.

Next up for Gators Women’s Basketball

One thing Florida will need to work on is its turnovers. Florida coughed up possession 22 times, after committing a season-high record of 30 turnovers against Houston. The Panthers scored 19 points off the Gator’s turnovers, while Florida scored only five off Prairie View A&M’s 12 turnovers.

Talia Baia is a sophomore at the University of Florida studying journalism with a concentration in sports and media.
@talia_baia
Previous Union County To Face Off Against Northview In State Semifinals
Next Bills vs Patriots Thursday Night Preview