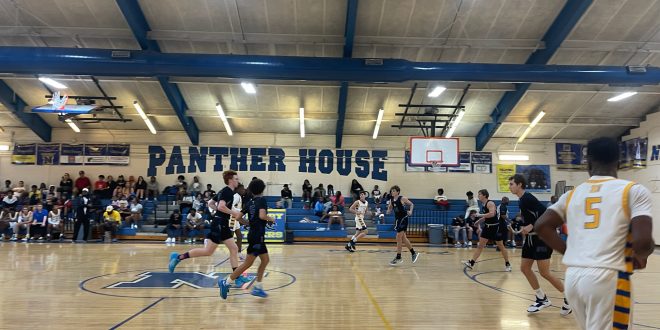 The Newberry Panthers bulldozed the St. Francis Catholic Wolves in their matchup on Tuesday night, with a final score of 80-46.

Newberry served as a wall on defense, making it difficult for St. Francis to get out of their backcourt and into scoring position. They complemented this with a productive offense, as they set up effective plays and were aggressive in the paint. The Panthers fought hard on every possession to carry this momentum with them through 32 minutes of play and saw success because of it.

Tyler Marden of the Newberry Panthers opened up the first quarter with a nothing-but-net three, which would set the tone for the coming eight minutes. After this, Newberry would go on to outscore the Wolves by triple in the first, putting up 21 points while only allowing seven.

Kaleb Woods came out swinging, making a big impact on the offensive front as he put up more points himself than St. Francis did all quarter. Each Panther put their body on the line to prevent the Wolves from scoring, and their defensive efforts did not go unnoticed.

Newberry is displaying incredible defensive intensity, forcing St. Francis into an efficient half court trap. Newberry imposes their will on the defensive end with this aggressive block. pic.twitter.com/NCDiDVMOjq

Can the Wolves Comeback?

St. Francis was able to step up their offense in the second and third quarters, but this was still not enough to stop Newberry’s rhythm. The Panthers would retain their double-digit lead for the remainder of the game. This can be attributed to Kingston Brannon’s effort on the offensive boards, as he worked to get the rebound and give the Panthers second-chance opportunities.

During these quarters, St. Francis’ Tyler Dey served as a problem for Newberry’s defense, putting up 12 points. Despite his efforts, it was not enough to shrink the lead, as the Wolves continued to make careless and costly mistakes, particularly turnovers. St. Francis would continue to have a tough mountain to climb as they trailed by 20 points into the final eight minutes.

Newberry was determined to finish what they started, and they did just that. The Panthers collectively put up 23 points and let up only nine in the fourth, outscoring the Wolves by another 14-point margin. This is a testament to Newberry’s ability to move the ball effectively, play unselfish basketball, and dominate on defense. Specifically, on the defensive end, Newberry applied a lot of pressure and forced a plethora of turnovers.

St. Francis struggled to keep up with Newberry and failed to find any form of rhythm. They remained at the base of the mountain and were unable to surmount a comeback. Overall, the Panther’s squad is made up of well-rounded players with a drive to best their competition.

And that’s a wrap. Newberry controlled every aspect of this ball game in dominant fashion. Panthers win 80-46. pic.twitter.com/Vlg9NScycY

The Newberry Panthers look to bring home another win in their next matchup against the Trenton Tigers at home on December 8 at 8 p.m.

Rachel Rosen is a sophomore at the University of Florida studying journalism with a specialization in sports and media.
Previous Lady Wolves Overcome a Slow Start to Win Their Fourth Straight
Next Gators Women’s Basketball Extends Win-Streak to Seven