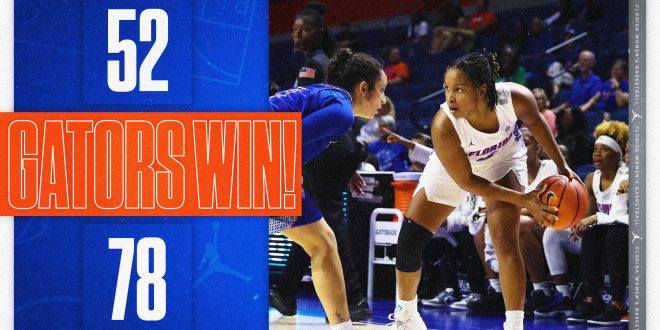 The Florida women’s basketball team ran its winning streak to seven games after beating Presbyterian College at home 78-52 in an excellent display of offensive and playmaking ability. The Gators controlled the scoreboard for most of the game and have made serious strides in controlling their turnover problems. Florida is now 9-1 on the season.

The Gators shined from beyond the arc and at the charity stripe, shooting 53.8% from three and going 19-26 from the line. The squad continues to flourish with points off turnovers accruing 22 points from Presbyterian’s mistakes. The Gators had a very low 16.2% turnover percentage compared to Presbyterian’s 30%. The Gator bench had a great night for the squad, contributing 19 points to the team.

Guards KK Deans and Alberte Rimdal had a fantastic night, with Deans as the Gators’ floor general. Deans had 18 points, three rebounds, five assists and a steal. She shot 80% from three and went 7-11 from the field. Rimdal had just as excellent a performance showing up all over the box score with 17 points, one rebound, one assist, one block and two steals.

The Gators dominated the paint getting 26 points inside, and worked the offensive glass well with nine second-chance points. Taliyah and Tatyana Wyche continue to be a dynamic duo on the glass for the Gators, with a combined 17 rebounds, with six being offensive rebounds.

The Gator defense had quite the outing, completely controlling the pace and rhythm of the game.  Florida had four blocks and nine steals while keeping Presbyterian to just 16 points in the paint. The Gators played well in transition, only allowing six points, and held Presbyterian to 12 points from Gator turnovers.

The first half was an excellent foundation for the Gator defense as it held Presbyterian to 33% from the field in the first quarter. The perimeter defense was great from the Gators all night long, refusing to allow easy shots for the opposition. Presbyterian went just 4-13 from beyond the arc and 12-31 from the field.

The Gators did well to refrain from fouling and getting into trouble while giving away free points at the line. They kept Presbyterian to nine free throws on 11 chances from the charity stripe.  The Gators locked up in the second half, stifling and stalling Presbyterian’s offense. The Gator defense only allowed 22 points and kept Presbyterian to a shocking 6 for 25 from the field and 3 of 14 from three-point range.

The Gators’ next matchup is against the 7-3 Hurricanes in Miami on Sunday at 4 p.m. The Hurricanes are coming off a home win against North Florida, where they won by 40 points (85-45).