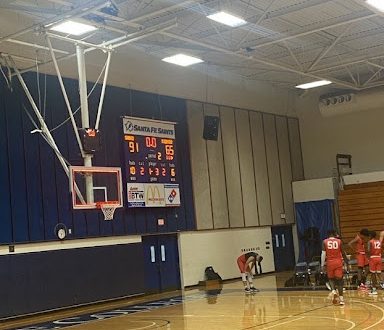 The Santa Fe Saints used a strong first half to put away Fairmont Academy 91-65 Monday night. After a three-game road stint, the Saints returned home and extended their winning streak to three games. Santa Fe moves to 6-3 after the win.

Guard Nigel Martin started off the scoring early for the Saints. Martin finished as the joint top scorer for Santa Fe and his early contribution helped the Saints establish rhythm offensively.

The game remained tight early as Santa Fe held a slim 15-11 lead after five minutes in the first half. Both sides played at a high pace, but it favored the Saints and helped them build a larger lead. Santa Fe forced early turnovers and adjusted to Fairmont Academy defensively.

Midway through the first half, Santa Fe led 24-15 over Fairmont Academy. Guard Giovanni Baerga-Uselis widened the lead even more with seven points in a row with a barrage of three-pointers. Missed free throw opportunities kept Fairmont from clawing back into the game as the team shot just 60% from the charity stripe. The Saints went into halftime with a 43-24 lead.

The second half opened up much closer with both sides becoming more physical and picking up the intensity defensively. Fairmont and Santa Fe were both drawing fouls and made trips to the free throw line, with the Saints finishing with a 73.7% free-throw percentage on 19 attempts.

The Saints shut the door on Fairmont as the second half progressed. Martin hit a four-point play to make it 74-49. Towards the end of the game, forward Eli Taylor threw down a powerful dunk off of a nice assist to put a bow on the win.

Martin and Baerga-Uselis both led the Saints in scoring with 18 points apiece. Guard Tom Di Maria and forward Mackye Bowles followed them up with 12 points apiece.

Santa Fe finished with 49.3% field goal percentage, in what proved to be a great game shooting for the Saints. The Saints also shot 38.9% from three-point range — draining seven three-pointers.

The Saints dominated down low and finished with 40 points in the paint, while holding Fairmont Academy to just eight points inside. Santa Fe also dominated in rebounds and assists showing a real effort to crash the boards and move the ball around. Santa Fe outrebounded Fairmont 50 rebounds to 40 and out-assisted them 22 assists to 11.

Guard Darrien Jones led the team in assists with 10. Forward Macius Trowe nabbed the most rebounds with 10, but every Saint secured at least one.

Santa Fe will be on the road again this weekend to participate in the Florida College’s Men’s Basketball Shootout in Daytona Beach. The Saint’s first game is against Northwest Florida State College Saturday at 5 p.m. Santa Fe’s second game is against Hillsborough Community College Sunday at 7:30 p.m.