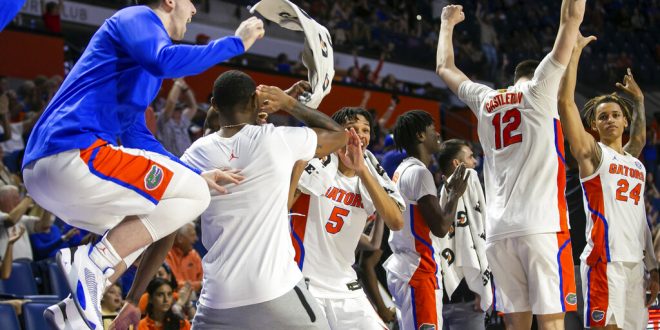 Florida's bench erupts after center Jason Jitoboh makes a three pointer in the second half of an NCCA college basketball game on Sunday, Dec, 4, 2022, in Gainesville, Fla. (Doug Engle/The Gainesville Sun via AP)

The Florida Gators (6-3) men’s basketball team plays against the undefeated University of Connecticut Huskies (9-0) Wednesday night at the Exactech Arena in the O’Connell Center.

The Gators were able to lock another win (89-51) against Stetson University on Sunday. Sophomore Will Richard led the team with 14 points and made all four shots made from three-point range. Kowacie Reeves followed with 12 points and three rebounds. Colin Castleton collected 11 points, five rebounds and three assists. Alex Fudge recorded 11 points, eight rebounds and 7-7 free throws.

“This was the first time all year where I felt like this is what are team should really look like,” head coach Todd Golden said after the game.

Recap the win over the Hatters ⏮#GoGators pic.twitter.com/BI8xQVP3D0

Florida meets its biggest competition yet, No. 8 UConn is looking to continue its undefeated streak. UConn won the Phill Knight Invitational while Florida went 1-2, including the blowout (84-55) against from the West Virginia Mountaineers. The Huskies beat Oregon (83-59), Alabama (82-67) and Iowa State (71-53). The Gators are averaging 81.0 points per game and allowing their opponents to average at 69.0 points per game.

The Huskies are averaging 82.9 points per game and allowing their opponents to average 58.7 points. The enthusiasm from the Rowdy Reptiles will be a something new for the Huskies to experience according to the UConn head coach Dan Hurley.

Tune in on Wednesday night when the Gators take on the Huskies at the Stephen O’Connell Center. Tip off is at 9 p.m.

Previous Lightning drop one at home to the Red Wings
Next NFL Week 13: Jackson is Down, Purdy Showed up and Watson Struggled