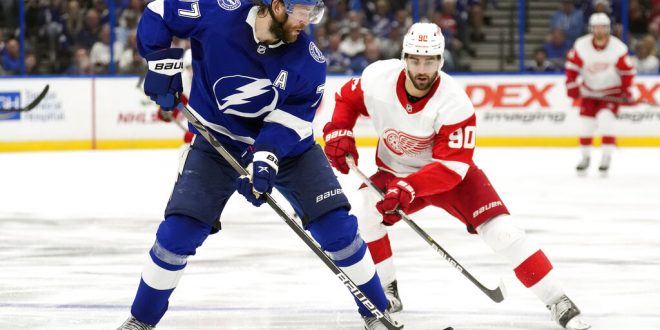 The Lightning came into Tuesday’s divisional matchup against the Red Wings with momentum. They were winners of eight of their last 10 and on a two-game winning streak. This success was good enough to be third in the Atlantic Division with a record of 14-9-1.

The Red Wings have been a very capable team to start the season. Detroit came into this matchup at 12-7-5 and fourth in the Atlantic Division, which would result in a playoff berth if the season ended today.

The team has gone the last six seasons without making the playoffs, suffering through below .500 records in all of those years. This year things have been different, which set up for an important divisional game.

Red Wings pile on Lightning in the Third

The game was tight at the beginning of the night. The teams finished the first period scoreless, with the first goal of the game coming minutes in the second to put the Red Wings on top.

The goal was netted by Michael Rasmussen after he cut past Tampa’s last line of defense, receiving assists from Dominik Kubalik and Filip Hronek who pushed the puck up the ice.

Neck and neck the teams went. The next score would not come until about six minutes into the third to put the Red Wings up two. The goal came via Jonatan Berggren slap-shot to the top right corner of the net, off the Olli Maatta assist.

The Lightning would tighten the gap with a little over five minutes in the game with a Steven Stamkos goal. Stamkos ripped a slapshot past the keeper when Tampa Bay had an extra man on the ice for pulling its goalie.

This empty net strategy would result in the Red Wings next goal. Adam Erne put Detroit up two goals again with an empty net. In due time, Tampa Bay responded with another goal. The comeback was halted, though, by another Red Wings empty net goal.

The final score on the night was 4-2. With the loss, Detroit and Tampa Bay are now tied at 31 points on the year for third in the Atlantic division.

The Lightning are back in action next on Thursday at 7 p.m. against the Nashville Predators.

Previous P.K. Yonge Blows Past Eastside on the Road
Next Gators Men’s Hoops Host the Huskies