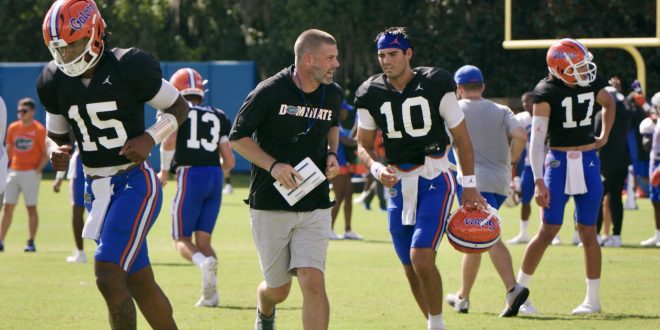 Who is Florida QB Jack Miller?

After Anthony Richardson committed to the 2023 NFL Draft, and off-field issues arose for backup QB Jalen Kitna, the University of Florida was faced with a tough decision: Who will be their starting quarterback for the Las Vegas Bowl against Oklahoma State? The answer that Gators Head Coach Billy Napier decided on is Jack Miller.

Where Did Jack Miller Come From?

Although most Gators fans are not familiar with Miller because of his minimal playing time, he actually was a valuable prospect coming out of high school. Miller was ranked as a four-star recruit from Scottsdale, Arizona. In his four years of starting for his varsity team, he passed for almost 10,000 yards and 130 touchdowns. This spectacular quarterback play would lead him to a tough decision on where he would play college football.

Jack Miller ultimately decided to play football at Ohio State University. Unfortunately for Miller, things didn’t go as planned as he didn’t get the on-field time he wished for. This led Miller to enter the transfer portal right after the 2021 season, on November 28, 2021. Miller revealed that the reason he transferred was to showcase his talents at another football program. Under a month after entering the portal, Miller announced his commitment to UF on December 21, 2021.

What to Expect Heading into Saturday

Miller has very little experience on the big stage. He played in UF’s spring game, where he completed 13 of 23 passes for 121 yards. Additionally, he threw an interception. During his disappointing season with Ohio State, he competed in four games but did not have much of an impact. In these games combined, he completed seven of 14 passes for 101 yards. While this was an unexpected start for the Gators, Miller has an opportunity to show the world why he’s worth time on the field. Although the 2022 season was a disappointment for UF, Gator fans will be looking for Miller to give them one last spark of energy on Saturday.