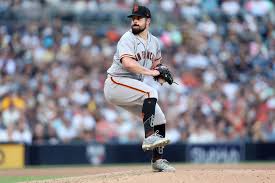 Breaking: Carlos Rodón and the Yankees are in agreement on a six-year, $162 million contract.

Rodon is a flame-thrower on the mound. Reaching 99 and living at the top of the zone, generating tons of swings and misses. He is coming off dominant performances in both 2021 and 2022. Posting a 2.37 ERA and 2.88 ERA in respective seasons.

The pitcher really put it all together at the start of the 2021 season. In the six seasons before, Rodon never had an ERA under three and had trouble staying healthy.

In 2021, he pitched for the White Sox but became a free agent after. After receiving Cy Young votes that season, Rodon looked to cash in. No team was willing to go long-term based on his limited success, but he scored a two-year $44 million deal with the San Francisco Giants with an opt-out after the first year.

With another strong year of pitching in 2022, Rodon proved his success is no fluke. He opted out of his deal with the Giants and became a free agent this offseason.

Rodon was one of the most intriguing arms on the market. A lefty pitcher coming off two years of Cy Young-level production. He is just 30 years old too. Which now could be considered young as pitchers like Justin Verlander and Max Scherzer are still dominant and making big money as they push 40 years old.

The Yankees are in the midst of a crucial offseason. They won the AL East and had a great year, but were eliminated by the Houston Astros once again this postseason.

Still looking to get over the hump and make a World Series, fans have been clamoring for the team to make some moves. Owner, Hal Steinbrenner, is answering the call and spending the needed money for the team to compete against the dominant Astros.

They retained Aaron Judge on a nine-year $360 million deal earlier in the offseason. As well as bringing back Tommy Kahnle on a two-year $11.5 million contract to help solidify the bullpen. Now Steinbrenner makes a splash for a front-line starter in Rodon.

Rodon comes to the Yankees on a six-year $162 million deal. He now joins a Yankees rotation with pitchers such as Gerrit Cole, Nestor Cortes, Luis Severino and Frankie Montas. Rodon will likely slide in as the number two pitcher on the staff.

This staff immediately rises to one of the best in the league. The top four starters in the rotation have all seen All-Star nods before. With Cole, Rodon, and Severino receiving the honor multiple times.

In baseball, a team can never have enough pitching and the Yankees adopted this mentality when signing Rodon. There will be no easy game when teams come to visit the Bronx.