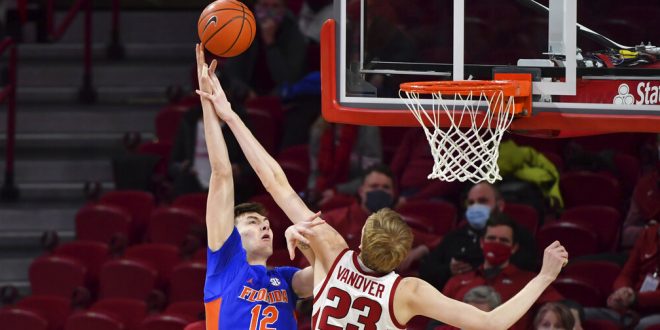 At the annual Jumpman Invitational, the Florida men’s basketball team (7 -5) lost to the Oklahoma Sooners (9- 3), 62-53. Despite the loss, Colin Castleton scored 22 points and grabbed eight  rebounds in the game for the Gators.  He was more aggressive on both ends of the floor compared to the past few games. This match up was Florida’s last nonconference game before it takes on Auburn to begin SEC play next week.

Florida started this game looking much better on the offensive and defensive end than they had against their more challenging opponents. They never trailed at any point in the first half and led by as much as 11. On offense, Colin Castleton was going to work in the paint. He wasn’t afraid to take contact and go to the free-throw line. He finished the half with 10 points. Trey Bonham was another key to their offense. He went 5-5 from the free-throw line in the first half and logged 10 points.

Defensively, the Gators were physical. Their transition defense caused numerous easy misses by the Sooners. This allowed them to maintain a small lead for the duration of the half.

Sooners Take Over In The Second Half

The Sooners opened up the half with a hot hand on offense. They hit open threes that were created from long offensive rebounds. Oklahoma guard Grant Sherfield was dynamic from all spots on the court. He was the key to their offensive success in the second half, where they took their first lead of the game. Grant finished the game with 22 points on 53% shooting from the field.

The lead kept getting larger as the Gators couldn’t hit a shot. Their threes were not falling and Florida turned the ball over too many times.

Conference Play Begins For Both Teams

The Sooners play a talented Texas team next week in their first game of Big 12 play.

The Gators kickoff SEC play next week against Auburn. The Tigers are a very good team that has been nationally ranked since the first week of the season.  And with the league boasting numerous other ranked teams like Alabama, Kentucky, Arkansas, Tennessee and Mississippi State, the league schedules should prove challenging.