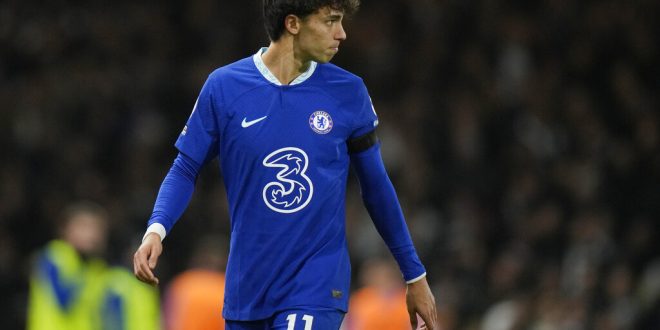 Chelsea have been short a striker all season, with Kai Havertz lacking form, Armando Broja injured, and Pierre-Emerick Aubameyang potentially leaving. The London club has been active in January’s transfer window but had yet to sign their missing piece. Chelsea’s search for a striker may finally be over.

Chelsea have signed Atletico Madrid striker João Félix on loan, per the club.

Per ESPN, Chelsea paid an £11 million loan fee for Félix. The forward also extended his Atletico Madrid contract through June 2027 in an effort to reduce Atletico’s wage bill to meet La Liga’s salary cap. Despite the extension, it remains unclear if Félix will play for the Spanish club again.

“Chelsea is one of the great teams in the world and I hope to help the team reach their objectives, so I am very, very happy to be here and very excited to play at Stamford Bridge,” said Félix.

“He is a quality player, and he will make a difference in the final third of the pitch. He is young but has really good experience. The signing gives everybody a lift,” said Chelsea manager Graham Potter.

Félix started his career at Portuguese club Benfica before moving to Atletico for a €127.2 million fee. The 23-year-old has struggled since joining Atletico, with manager Diego Simeone’s defensive play style stalling the forward.

Félix now moves to Chelsea, where his attacking talents will be utilized. Félix figures to see immediate action given recent injuries to forwards Christian Pulisic and Raheem Sterling.

Connor O'Bryan is a world soccer reporter for ESPN Gainesville. He also sometimes covers baseball and other sports. He has previously written for WUFT Gainesville and for Atrium Magazine. Connor also cohosts the "Off The Bar Podcast", a student driven podcast that focuses on the global soccer landscape.
@ConnorOBryan3
Previous NCAA Council votes to limit transfers
Next Women’s Basketball Set to Host Kentucky Sunday