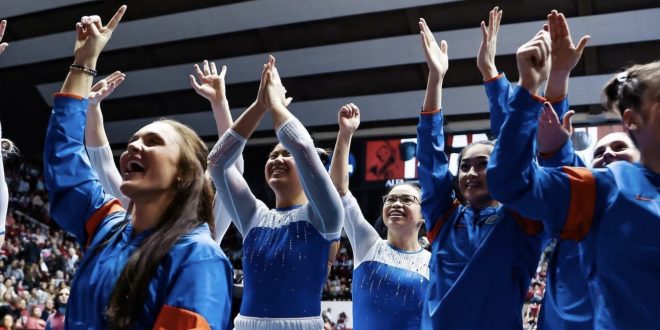 The No.2 Gators Gymnastics team took down No.11 Alabama on January 20, 2023. (Photo courtesy of @gatorsgym via Instagram.)

No.2 Gators Gymnastics Improves to 5-0 After Defeating No.11 Alabama

The No.2 Florida Gators traveled to Tuscaloosa, Alabama for their first away meet of the season to take on the No.11 Alabama Crimson Tide. In the 2022 gymnastics season, Alabama fell short behind Florida at the SEC Championships, where they placed second. This meet was packed with excitement and action as Olympians, World Champions and NCAA winners took the floor to compete.

At the halfway mark, Florida extended its lead over the Crimson Tide 98.675-97.775. Alabama seemed to struggle on the uneven bars, as Lauren Little and Jordyn Paradise both fell off during their routines. For her third straight vault win in a row, Trinity Thomas scored a 9.90 with her teammate Payton Richards following closely behind with a 9.875.

During the third rotation, the Gators were on the floor and Alabama was on the beam. After the rotation, Florida continued to lead the meet 147.975-147.025. Florida’s Lauren Hurd is back after recovering from an ACL injury. She scored 9.675 on her floor routine. Thomas also continues to lead the overall with her winning score of 9.95 on the floor. Alabama had strong scores overall on the beam, but it wasn’t enough to put them in the lead.

Gabby Gladieux sticks her dismount and scores a 9.850!