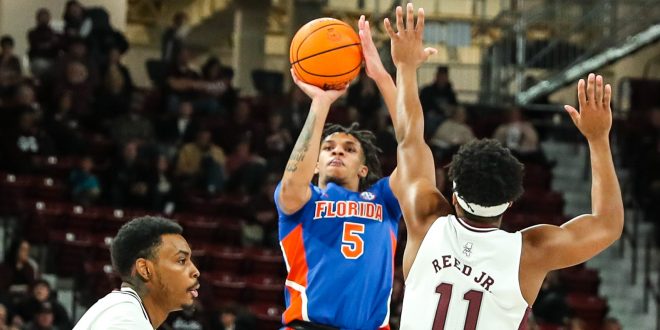 Florida guard Will Richard hits a three against Mississippi State on January 22, 2023. (Photo courtesy of @GatorsMBK via Twitter.)

The Orange & Blue paid a visit to Starkville to take on the Mississippi State Bulldogs on Saturday. The Gators came out of the contest with a close 61-59 win over the Bulldogs. Saturday’s victory marks win No. 1,500 for the Florida Gators men’s basketball program.

Florida brought the heat early with Gators center Colin Castleton knocking down his second career three-pointer at the 18:01 mark in the first half.

Then, two more threes from Florida guard Will Richard and forward Alex Fudge would give the Gators an early 11-3 lead. Throughout the half, the Gators continued to bring the energy offensively, playing well against a strong Bulldog defense.

The half would be highlighted by a tremendous chase down block by Fudge, which led to an easy two on the other end of the court by Florida guard Kyle Lofton.

Awesome chase down block by @iam_AlexFudge, which leads to an easy two on the other end by @Kloft0. #Gators up 33-17 over #HailState with 2:54 remaining in first. #GoGators #HailState pic.twitter.com/n9G8xdhFMN

Florida remained out in front for the duration of the first, picking up its largest lead of the night when Lofton laid it in on an assist from Gators guard Myreon Jones. The Gators were now up by 16, with 2:54 until the half.

Florida came out of the half with a 33-24 lead over the Bulldogs. One minute into the second period, Gators guard Riley Kugel swished a three, putting an end to a 9-0 Mississippi State run.

However, the Bulldogs entered the second with a newfound energy on both ends of the court. Mississippi State guard Dashawn Davis hit a three-pointer on an assist from Bulldogs forward D.J. Jeffries, tying the game at 40 with twelve minutes even remaining on the clock.

Florida guard Kowacie Reeves was able to put up a quick three, bringing the Gators back out in front before Davis answered with another three of his own, again tying the game at 43.

A Castleton layup and Jason Jitoboh jumper would give the Gators back the lead 47-45, with 8:40 left in game. Florida managed to remain out in front for the remainder of the contest. Despite several missed shots in the final seconds, the Gators would survive Starkville, leaving with a 61-59 win over the Bulldogs.

Up Next for Gators

Ellie is a third-year sports and media journalism major at the University of Florida.
@ellie_shreve
Previous No.2 Gators Gymnastics Improves to 5-0 After Defeating No.11 Alabama
Next Gator Men’s Tennis Handles UCF

ITA Kick-Off Weekend was a resounding success for Florida tennis. With wins against USF on …