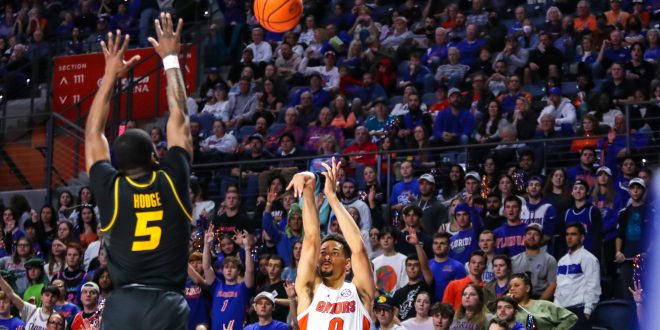 Myreon Jones shoots a 3-pointer in the Gator men's basketball team's win over the Missouri Tigers on Jan. 14. Photo courtesy of @GatorsMBK on Twitter.

The Florida Gators men’s basketball team will travel to Mississippi State on Saturday to take on the Bulldogs. After a tough 54-52 loss away at Texas A&M, the Gators look to bounce back.

On the road ✈️ pic.twitter.com/bFQ8AtnHNz

Gators Middle of the Pack

Florida is currently 10-8 on the year. Since conference play has began, the Gators are 3-3. However, they are 3-1 in their last four with three straight wins coming against Georgia, LSU and Missouri.

Florida goes into Saturday’s matchup following some solid play and will look to continue their midseason push.

The Bulldogs started off the 2022-23 campaign as one of the hottest teams in the country under first year head coach Chris Jans. They are led by senior forward Tolu Smith, who is averaging 13.8 points per game and 7.9 rebounds.

Starting a flaming hot 11-0, the fire has since been doused after beginning SEC play.

The Bulldogs come into this game against the Gators last in SEC play with a 1-5 record and have lost three straight games. Their last win, and only one in conference play, came against Ole Miss on Jan. 7.

Mississippi State is now 12-6 on the season. A home win against Florida will help them take a step back in the right direction.

"We're a good basketball team. If we can stick together and stay the course, we will have opportunities to win games in this league this year." – @coachchrisjans #HailState🐶 pic.twitter.com/5VohwxY6u7

The Gators are led by senior forward Colin Castleton, who was voted to the Preseason All-SEC First Team. He leads the squad in five categories and was awarded SEC Player of the Week on Monday. He posted a solid 18 points and five blocks against LSU, following that with an outstanding 16 points, 13 rebounds, six assists, three steals and two blocks against Missouri.

Castleton is averaging 14.9 points, 8.1 rebounds and 3.2 blocks on the season. he’s been a key factor in the Gators recent success, and leads the charge into Starkville.

Crunch Time for the Gators

With 13 games left on the schedule, Gators head coach Todd Golden and his squad look to turn up the heat and get themselves out of the middle of the pack.

Jack Alperstein is currently a sophomore at the University of Florida studying Sports Journalism.
Previous Giants and Eagles Set for Playoff Showdown
Next No.2 Gators Gymnastics Improves to 5-0 After Defeating No.11 Alabama