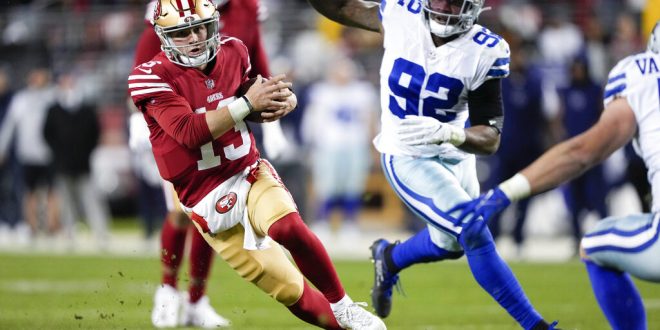 The San Francisco 49ers secured their place in the NFC title game Sunday night, defeating the Dallas Cowboys 19-12 in a Divisional contest that came down to the wire.

Tied 9-9 entering the final quarter, 49ers quarterback Brock Purdy handed the ball off to running back Christian McCaffrey, who busted up the middle for a two-yard touchdown that gave San Francisco the lead for good. It’s the 12th straight victory for the 49ers, their longest winning streak since 1984.

San Francisco will look to avenge its 20-17 loss to the Los Angeles Rams in last year’s NFC championship.

Signs that Prescott would not be able to repeat his Wild Card performance appeared early on. With 5:49 to go in the opening quarter, Prescott threw his first interception of the half to 49ers cornerback Deommodore Lenoir.

San Francisco capitalized on the turnover, relying on 40-year-old kicker Robbie Gould to drill a 26-yard field goal to take a 3-0 lead. That turned out to be the only score of a slow first quarter.

Cowboys Back on Top

Gould tied the game at six apiece with a 47-yarder with 3:43 to go in the half. After losing running back Tony Pollard to a high ankle sprain (later diagnosed as a fractured left fibula), Prescott threw his second pick of the first half with just over a minute on the clock.

Head coach Kyle Shanahan sent out Gould once more for a field goal attempt, and he delivered from 50 yards away to give San Francisco a 9-6 advantage at the half.

Maher finally found his groove with 9:08 in the third quarter, sending a 25-yard kick through the uprights to tie the game at nine.

The deadlock lasted until the first play of the 4th quarter when McCaffrey scored San Francisco’s only touchdown. Maher hit a 43-yarder with 11 minutes to go to bring the deficit to four, but Gould tacked on three more points with his fourth and final field goal of the game with three minutes to go.

Prescott and the Cowboys had possession twice in the final minutes of the game but were unable to convert on their opportunities. Prescott went three and out with under three minutes to play and received a second chance when San Francisco punted with 45 seconds left. On third down and ten with six seconds left in the ballgame, Prescott threw over the middle to Kavontae Turpin for an 8-yard completion.

This ended up being the last play of the game, as the final seconds ticked away on Dallas’ season.

San Francisco will take on the Philadelphia Eagles for the right to represent the NFC in Super Bowl LVII. Philadelphia, the No. 1 seed, will host the matchup at Lincoln Financial Field at 3 p.m. on Sunday.

The Eagles took down the New York Giants 38-7 Saturday to advance past the Divisional round.