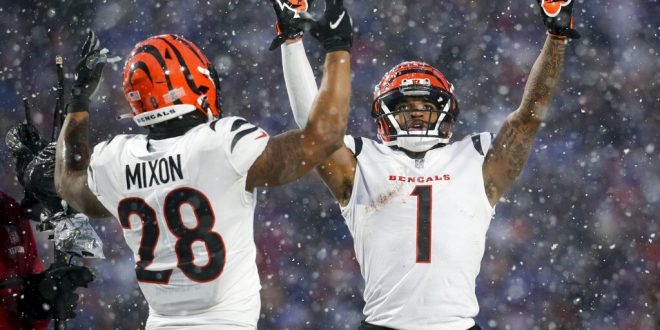 A snowy day in Buffalo didn’t slow down Cincinnati as the Bengals beat the Bills, 27-10.

Cincinnati will now head to Kansas City for an AFC Championship matchup with the Chiefs on Sunday.

On Sunday, the Bengals secured their spot in the AFC Championship Game after beating the Buffalo Bills 27-10.

This is their second year in a row making it to the AFC Championship Game.

In the 2021 NFL season, the Bengals beat the Kansas City Chiefs at the AFC Championship Game 27-24. That win led the Bengals to their third-ever Super Bowl.

Before their appearance in 2021, the Bengals hadn’t been in the championship game since 1988 when they lost to the San Fransisco 49ers. The Bengals have never won a Super Bowl title.

Bengals quarterback Joe Burrow started Sunday’s game off strong and continued his momentum throughout the game.

Within the first two possessions, Burrow had a total of nine passes for 105 yards. Wide receiver Ja’Marr Chase scored the first touchdown of the night. A few moments after the first touchdown, tight end Hayden Hurst caught a 15-yard pass that pushed the Bengals up 14-0. Throughout the game, the Bengals got stronger while the Bills continued to struggle on home turf.

It was a tough day for the Bills as they struggled to keep up with the Bengals. The Bills weren’t able to score during the first quarter but managed to get a touchdown during the second quarter. Bills quarterback Josh Allen rushed for one yard to secure their first touchdown of the night.

At halftime, the score was 17-7 in favor of the Bengals.

During the third quarter, Tyler Bass kicked a field goal adding three points to the Bills’ score. At the end of the third, the Bengals had increased their lead, to 24-10.

The Bills were hindered by injuries during the fourth quarter.

Safety Jordan Poyer and cornerback Tre’Davious White collided with each other while trying to break up a pass from Burrow. Both players were removed from the game with head injuries.

Ouch, both Tre'Davious White and Jordan Poyer are down are they hit each other.pic.twitter.com/XRRtVh3MQ4

What’s Next for the Bengals?

The Bengals will take on the Chiefs in Kansas City for an AFC Championship rematch Sunday at 6:30.