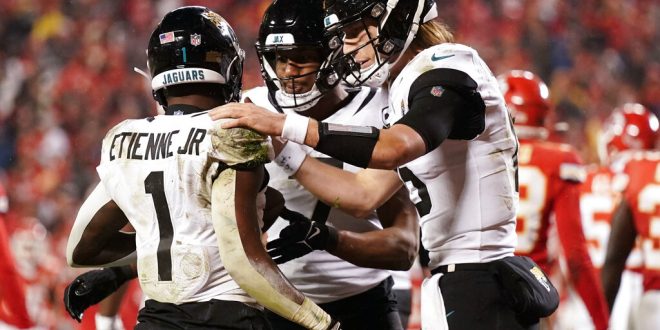 The Jacksonville Jaguars’ six-game winning streak came to an end Saturday at Arrowhead Stadium after the Kansas City Chiefs prevailed by a touchdown in the divisional round of the AFC Playoffs.

Under first-year head coach Doug Peterson, Jacksonville clinched the AFC South and produced its first winning season since 2017 when the Jaguars blew a 10-point lead in the fourth quarter of the AFC Championship to the New England Patriots.

Despite falling short of another AFC Championship appearance, Pederson called it a “good first season” and is proud of the way the Jags battled adversity throughout the season.

“Nobody expected us — the Jaguars — to be in this football game from the beginning of the season to today,” Pederson said after Saturday’s loss. “We’re going to learn from this, we’re going to grow from this, and our expectation is to be in these games every year.”

Pederson is “excited for the future of Jacksonville” and called Jaguars quarterback Trevor Lawrence the “right leader” to build a championship roster around.

QB1 for the Jaguars

Lawrence nearly led Jacksonville to another second-half comeback, but Chiefs cornerback Jaylen Watson sealed the victory with a late interception.

WHAT AN INTERCEPTION. CHIEFS GET THE BALL BACK.pic.twitter.com/bIf8fMNxru

Lawrence admitted how “it stings” to fall short, but the former No. 1 overall draft selection is confident that things are “just getting started” for Jacksonville.

“We’ll be back, I’m confident in that,” Lawrence said. “This is more the beginning than it is the end of something.”

In his sophomore NFL season, Lawrence was one of only nine quarterbacks to eclipse the 4,000-yard passing mark. After tossing more interceptions than touchdowns in his rookie season, Lawrence bounced back in 2022 with 25 touchdown passes and five rushing scores to only eight picks.

Following Saturday’s loss, Lawrence waited in the Jags’ tunnel to congratulate his teammates on their way into the locker room.

Linebacker Foyesade Oluokun — who led the NFL in combined tackles in each of the past two regular seasons — is raising expectations following a successful first year under Pederson.

“To see that success in year one, we know what we’re a force to be reckoned with,” Oluokun said. “Coming into the season training camp, we’re not accepting mediocrity [any]more.”

“We know that we’re a force to be reckoned with… We’re not accepting mediocrity from this team.” – @foyelicious#JAXvsKC | #DUUUVAL pic.twitter.com/x5HBh45vJI

Jacksonville will enter the offseason with the 24th overall pick in the 2023 NFL Draft. The Jags have plenty of draft capital to work with as they sit on eight additional picks in the final six rounds.

Who should the Jags target at 24?#Jaguars #Jags #DUUUVAL

As free agency approaches, Pederson hopes to keep Jacksonville’s “core guys together” and return as many players from the 2022 roster.

“The nature of our business though is you can’t re-sign them all. It’s unfortunate,” Pederson said. “We’ve established something this year that I think is sustainable, and we’ve just got to build on it.”

Coach Pederson on the makeup of this locker room and impending free agents.#DUUUVAL pic.twitter.com/AdOCJpMGHH

Hi, my name is Griffin Foll and I am currently a senior at UF studying sports media journalism with a concentration in political science. I contribute weekly web and radio content for WRUF ESPN Gainesville and help cover the World Cup/Champions League soccer beat. Be sure to check out some of my recent articles!
Previous LSU vs Arkansas Preview
Next What’s Next for the Buffalo Bills