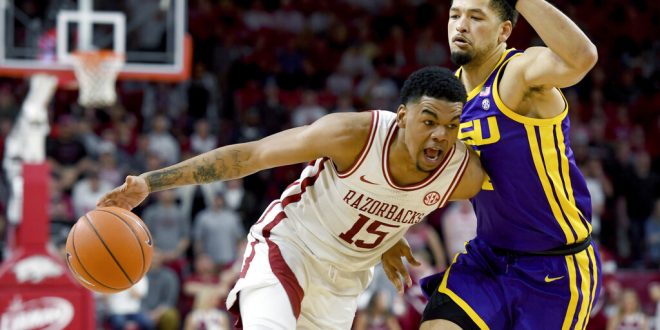 The LSU Tigers play the Arkansas Razorbacks Tuesday night. The Tigers look to put their 21-point loss against Tennessee behind them. The Razorbacks come into the game as the 25th ranked team in the nation. Both teams try to gain momentum in conference play, as both Arkansas (2-5) and LSU (1-6) have had early struggles against SEC opponents.

Rough Stretches for LSU and Arkansas

After starting the season 12-1, the LSU Tigers were destined for a top-25 ranking. Then things became bleak after six consecutive inner-conference losses. After nearly beating Kentucky on the road, the next four games for the Tigers have been ugly. LSU average loss was 26 points in the last four games.

Arkansas has not been much better over the last month, peaking as the 10th ranked team in the nation, a 1-4 stretch has caused the Razorbacks to fall in the rankings. Lucky for Arkansas, LSU has not beaten a SEC opponent in 2023.

The two teams come into tomorrow’s game with two prolific scorers. KJ Williams of LSU currently resides as the second highest scorer in the conference. He also leads the Tigers in rebounds, steals and blocks. The Murray State transfer looks to add March Madness aspirations to LSU.

For Arkansas, they come in lead by Wichita State transfer, Ricky Council IV. Council is third in the SEC scoring with 17.2 points and is looking to increase his draft stock after initially declaring for the draft but removed his name right after.

These two schools already have met this season. LSU won 60-57, as the Tigers upset what was then the 10th ranked team in the nation. The Razorbacks are looking to even the series tonight and get to do it on their homecourt.

Arkansas had a 40-34 lead with 10 minutes left in the game but couldn’t hold on. The Razorbacks look to avenge their late game misfortunes tomorrow night. 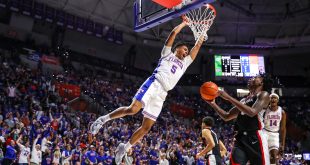