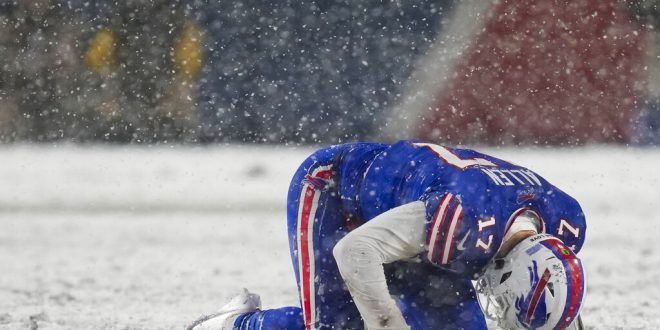 Buffalo Bills quarterback Josh Allen (17) reacts after being sacked by the Cincinnati Bengals during the fourth quarter of an NFL division round football game, Sunday, Jan. 22, 2023, in Orchard Park, N.Y. (AP Photo/Seth Wenig)

The Buffalo Bills lost to the Cincinnati Bengals 27-10 on Sunday, which eliminated them from the NFL Playoffs. Despite hoping to compete for the Super Bowl coming into the season, the Bills came up short for the third straight year. Now Buffalo will enter a crucial offseason where they will have to make some big decisions for their future. Josh Allen spoke on the disappointment of coming up short this season.

Heading into the offseason, the Bills have a total of 24 players who are set to become free agents. Some of Buffalo’s key free agents include safety Jordan Poyer, linebacker Tremaine Edmunds and running back Devin Singletary. The future for all three players remains uncertain as they hit the open market. Buffalo must start by making moves from within before free agency, as they sit $5.46 million over next season’s salary cap. In addition, defensive tackle Ed Oliver and wide receiver Gabe Davis are eligible for contract extensions in a few months. It will be an interesting offseason for general manager Brandon Beane as he makes decisions for the Bills’ future.

Key Performers for the Season

Even with the loss to the Bengals in the playoffs, the Bills still had a strong season. Quarterback Josh Allen had his third straight 4,000-yard season with 42 total touchdowns on the year. Allen continued to link up well with Stefon Diggs, who finished with 1,429 receiving yards and a career-high 11 touchdowns. Additionally, Gabe Davis increased his production by almost 300 yards with 836 yards this season, emerging as one of Buffalo’s best deep threat options. On the ground, Devin Singletary had a solid year with 819 yards and 5 touchdowns. Running back James Cook had a strong rookie season, who could get a heavier workload next season if the Bills do not retain Singletary.

On the defensive side, Tremaine Edmunds was excellent for the Bills in a contract year, leading the team in tackles with 102. He is someone would leave a big gap in the middle of the defense if he leaves for next season. Von Miller finished tied with a team-high 8 sacks, even with the season-ending injury he suffered in week 13. It was clear from the loss to Cincinnati that Buffalo really missed Miller’s presence on the field. Safety Jordan Poyer, who is also a free agent, led the Bills in interceptions with 4.

On special teams, kicker Tyler Bass had a solid year for Buffalo, going 27-for-31 on field goals and 48-for-50 on extra points.

Looking to Next Season

In his six-year tenure, head coach Sean McDermott has done a great job building a vision for his team, topping the AFC East for the past three years. Even though the Bills could lose a few players to free agency, a majority of the core is still there. At the end of the day, the Bills still have a really good team and should be expected to make the playoffs again next season. McDermott knows that this is a tough league to win in, but he knows his players will learn plenty for next year after their playoff elimination. The Buffalo Bills will have a huge offseason to look forward to, but they must make their current playoff window count.