While most Gator fans are still focused on Gator basketball and their runs in the NCAA Tournament, the 2012 version of the Gator football team was on display earlier this week as the team started spring practices.

Looking to rebound after a disappointing 7-6 season that was plagued by injuries, the Gators first need to decide who the team’s signal caller will be once next season begins.  Redshirt sophomore Tyler Murphy will compete against true sophomores Jacoby Brissett and Jeff Driskel for the chance to be the Florida’s next quarterback.  Although Brissett and Driskel have more game experience, Murphy has played well in spring so far and his strong arm and mobility could make for an interesting competition.  Florida head coach Will Muschamp says he is in no rush to choose the team’s next quarterback, saying the competition will likely last through the spring.

The departures of Chris Rainey and Jeff Demps also leave the Gators needing to fill a major hole in their backfield.  Together the tandem of Rainey and Demps accounted for more than half of the Gator offense last year.  Florida began its spring practices with senior Mike Gillislee as the starter, but redshirt sophmore Mack Brown has also looked sharp in practice as Muschamp moves toward more of a power running game.   To that end, tight end Omarius Hines will also work at running back for the Gators this spring.  At 6-foot-2, 223 pounds he is closer to the ideal size Muschamp hopes to have at that position.

The Gators also hope a playmaker at receiver will emerge during the spring.  Redshirt freshman Ja’Juan Story is a 6-foot-4, 200 pound wideout that has the potential to pick up large chunks of yardage after the catch.  A former four-star recruit, Story currently sits behind both Andre Debose and Frankie Hammond on the depth chart but his athleticism is hard to ignore.  During Saturday’s practice, the first in full pads, Story made a terrific catch over the middle that elicited cheers from some of the Gator faithful.

Spring practices are now closed to the public.  The next chance to catch the team in action is on Saturday, April 7th at the annual Orange and Blue game. 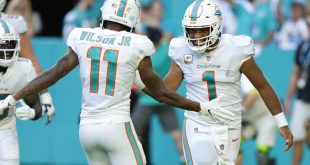