Eastside Football Shuts Out Anclote In First Round of Playoffs

The Eastside High School Rams football team finished tonight with a 37-0 victory against Anclote High School in the Class 5A-Region 2 quarterfinal.  Eastside’s defense shut out Anclote’s offense with several interceptions and forced fumbles.  The closest Anclote got to scoring a touchdown was late in the second quarter when Anclote had a first and goal from thre five yard line but Eastside’s defense stopped them, keeping them scorless in the first half.

Eastside coach Jeff Parker was really hyped and impressed with how well his defense handled Anclote.

Senior starting quarterback and defensive back Sir Jackson recorded two interceptions, returning one of them for a touchdown.  Coach Parker was extremely impressed with Jackson.

After this big win, Coach Parker says there are still some things they will work on for next week.

The Eastside Rams will play round two of the playoffs next Friday against the winner of the North Marion and Pasco game that takes place Friday, November 16th. 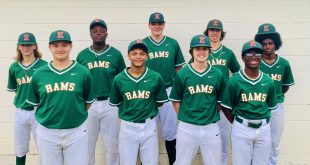