The Gator baseball team has overcome some early season struggles and turned a losing streak into a winning streak. Florida defeated Jacksonville University 8-5 on Tuesday in Jacksonville, then again last night in Gainesville 7-6.  Florida has now won four in a row to square its record at 7-7.

Gator coach Kevin O’Sullivan has said all season long that they’re going to focus on the positives; he points out the positives in their victory Wednesday night.

Florida’s junior lefty Daniel Gibson started on the mound for the Gators and threw a season high three innings while striking out four.  Relieving Gibson in the fourth was freshman right-hander Mike Vinson, who struggled the night before against JU but O’Sullivan said he had a talk with him before the game and isn’t surprised by his success at the mound.

Florida took a 3-0 lead in the game but the Dolphins rallied back in the third inning to tie the score at 3-3. The score remained the same until the seventh inning when Florida scored one run on three hits bringing the Gators up 4-3. Once again JU came back scoring two runs in the eighth inning, but the Gators tied the score at 5-5.

But JU got a run in the ninth to take the lead and that’s when Florida rallied for a walk off win.

In the bottom of the ninth, sophomore outfielder Justin Shafer led off with his fourth hit of the game, an infield hit.  Zack Powers was then hit by a pitch and sophomore catcher Taylor Gushue sacrificed Shafer and Powers around to second and third base. The Dolphins then decided to intentionally walk Vickash Ramjit to load the bases with one out.

Cody Dent, a late inning replacement, came to the plate and hit a short fly to left field as Shafer tagged at third.   He bluffed going home, and outfielder Nathan Koslowski dropped it as Shafer scored the tying run.   However, Powers was tagged out between second and third base for the second out.  Sophomore Connor Mitchell then stepped up big for the Gators, hitting a single on the first pitch he saw, scoring Ramjit and giving the Gators the win.

Mitchell says he was looking for a first pitch fastball.

Florida’s Justin Shafer went 4 for 5 including two doubles and is now hitting over .400 for the season; he talks about Florida’s win and what they still need to work on.

Make sure you download our iPhone app to get local sports coverage on the go! 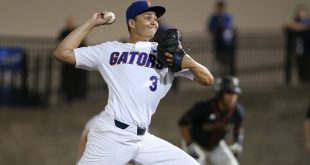 It’s been a long time coming. What may have been the longest offseason for college …