The No. 20 ranked Florida Gator baseball team will host the Florida Atlantic Owls tonight after wrapping up a perfect 4-0 week that included a win over No. 1 Florida State and a three-game weekend sweep of No. 4 LSU.

Righty Karsten Whitson (1-0, 5.65) will make his first career appearance against FAU, making it his fifth start of the season on the mound for the Orange and Blue.

The Gators have captured 20 of the 26 meetings against the Owls, including a 5-1 record under head coach Kevin O’Sullivan.  Florida dominated their last meeting on May 7, 2013 with a 7-1 victory over FAU. The Gators hold a five-game winning streak in the series since dropping a close 7-6 finish on March 4, 2009.

Listen in to ESPN 850 WRUF for live coverage beginning at 6:55. First pitch is set for 7pm.

Florida Putting a Pause on Gator Baseball and Lacrosse 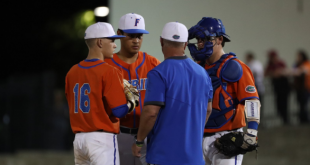 Mike Martin Jr. did something his Dad couldn’t in his last 11 tries in playing …