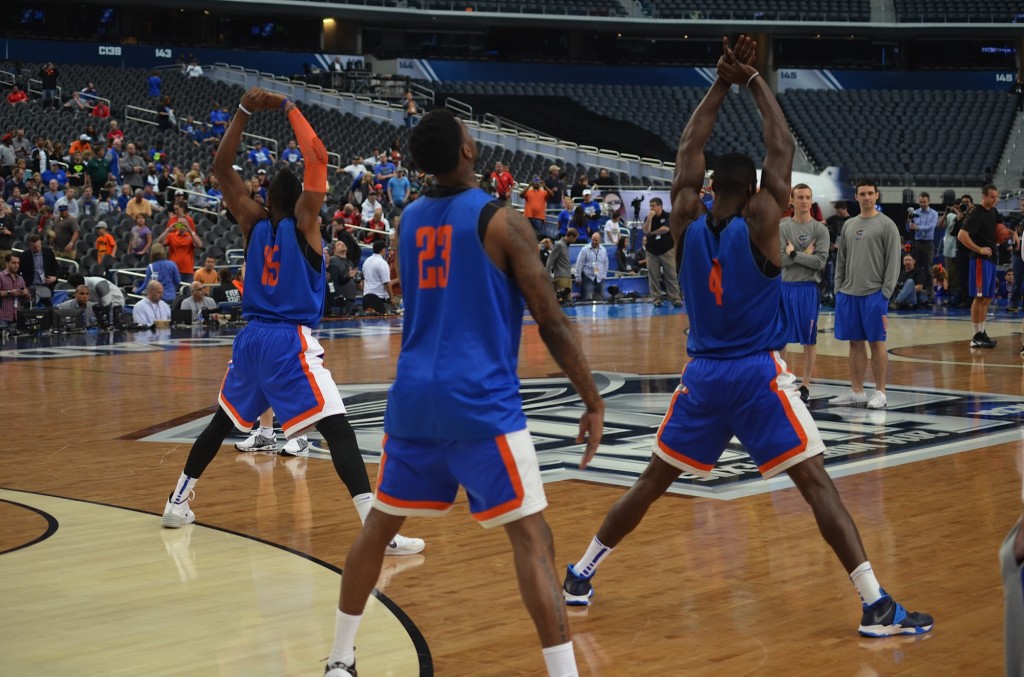 As the Florida Gator men’s basketball team stepped to the podium and into their private media rooms for the second time this week, their message was almost in unison: be yourself.

Florida knows they’re the No.1 team in the country, and they don’t just believe that because voters say they are, they’ve believed they could be all along.

During the individual media sessions with Florida’s starters at the NCAA Tournament in Dallas, most questions were asked about their previous match up with UConn which ended in a 65-64 buzzer beater loss off the hand of Shabazz Napier. But coming into this game, Florida is well aware that both teams are a lot further along in their development as players and as a team than they were back in December.

“Defensively, it’s going to take a team focus,” Florida forward Patric Young said. “Coming to help over is a key concept… if we can limit him (Napier) or even if he does what he does and we can limit the other guys, we’ll put ourselves in a good position to win the game.”

Gator head coach Billy Donovan went on to explain how Uconn has other good players around Napier, because Napier does such a good job of providing opportunities for his teammates.

On top of the questions asked of Napier, Donovan was asked whether he would rather have a team with a main player like Napier or a team like he has now where he can get production from six or seven different guys on any night.

“I would like to have four to six guys in double figures, because you don’t know what a team is going to try to do to take away from you. When a team takes certain things away, you still have to be able to have other guys step up in different situations and provide offense,” Donovan said.

A couple of questions designated to the starters were about the rest of the team. In specific, UF guard Scottie Wilbekin was asked about his relationship with Kasey Hill, how he’s taught him and helped him grow. Wilbekin answered and said Kasey learns on his own because he’s so willing to get better.

“I just try to give him pointers here and there. When I see something he’s struggling with that I went through, I try and help…. he does a great job of wanting to learn. It’s been a joy to play with him,” Wilbekin said.

As stated earlier, the theme of the day for Florida was “…if we do what we do…”

The takeaway from that is this; Florida has confidence. There’s always talk of Cinderella’s and teams on a hot streak and what team has taken a tougher road to reach the Final Four. But at the end of the day — and into the day Saturday — the Gators believe it is their tournament to lose.

And just to ease some worries, the Gators players say they’re not affected by the size or spacing of playing in AT&T Stadium. In fact, Dorian Finney-Smith laughed and said “It’s just basketball.”

Patric Young on how the team will defend against UConn

Billy Donovan on the team’s depth of scorers